Who's the 'Humanitarian Disgrace'? US Wants to 'Destabilize Entire Middle East' 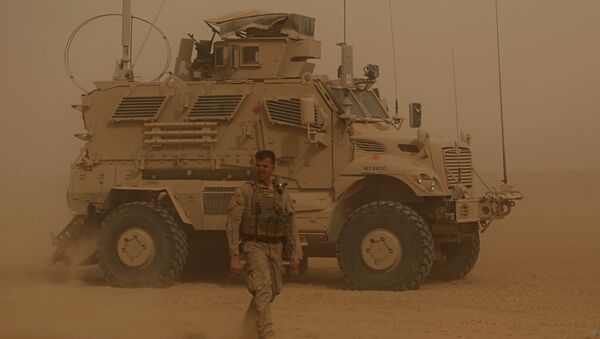 © AP Photo / Khalid Mohammed
Subscribe
International
India
Africa
President Trump's claim that Moscow, Tehran and Damascus are responsible for a "humanitarian disgrace" in Syria over the situation in Eastern Ghouta have led Russian international politics observers to ponder the implications of the remark, and what it means for the goals pursued by Washington in the war-torn country.

Speaking to reporters at a joint press conference with the Australian prime minister on Friday, the US president railed against Russia, Iran and the Syrian government, while claiming that the US was in Syria "for one reason…to get ISIS and get rid of ISIS and go home."

What 'humanitarian disgrace' was Trump referring to? Last month, the BBC accused the Syrian military of using chemical weapons in Eastern Ghouta, a jihadist-controlled enclave in the Damascus suburbs, which the US and its allies have designated as 'rebels' despite their radical Islamist ideology. The BBC's claim gained traction with support from the US State Department. Amid the ensuing Syrian Army campaign to clear the area from the terrorists following the breakdown of a ceasefire, the US and its European allies called for an immediate ceasefire, citing the catastrophic humanitarian situation. The Russian Defense Ministry countered, pointing out that the militias were blocking civilians in the region, effectively turning them into human shields.

Putin to Macron, Merkel: Syrian Truce Doesn't Apply to Anti-Terror Ops
Speaking to French and German leaders by telephone on Sunday, Russian President Vladimir Putin emphasized the cessation of military activity in Eastern Ghouta agreed by the UN Security Council "does not apply to the operations against terrorist groups."

Putin's remarks complemented those of Russian Foreign Minister Sergei Lavrov, who slammed Washington on Friday over the fact that eastern Ghouta's Nusra-affiliated jihadists had once again "somehow found themselves on the same side of the barricades as the critics and accusers of the Syrian government." Russia, Lavrov stressed, had "no evidence" that the US-led coalition in Syria even sees Nusra – the Syrian branch of al-Qaeda, as a target in its military campaign.

US Goal in Middle East: Defeat Daesh, or Destabilize the Region?

Asked to comment on President Trump's remarks, Alexei Podberyozhkin, the director of the Center for Military & Political Studies at the Moscow State Institute of International Relations, said that destabilizing the Middle East, not 'getting rid of Daesh', was Washington's real aim in Syria.

"The US's strategic goal in Syria, as well as in Iraq and Afghanistan, is to destabilize the situation in the region," Podberyozhkin said, speaking to RT Russian. "This can be achieved by a variety of methods, but the most optimal is to provide support for various organizations created and then supported to conduct military operations," he added. "This is especially true in the case of Syria. At the moment, Daesh is 'leaving the stage', so to speak, but these same people will then turn into some different armed gangs which will be supported by the United States. And if this is not enough, they will simply be created again from scratch. This is a kind of product of the activities of the US intelligence services."

Russia's Syrian 'Humanitarian Disgrace'? Fact-Checking Trump's Claims
In that sense, the observer noted, the US charges against Russia are aimed at diverting attention from its own activities in Syria.

"What Trump says is an obvious political and psychological smoke-screen…Similar methods have been used dozens of times. This is rhetoric which has nothing to do with reality. The situation in the world has changed, and now, instead of real politics, there are only 'virtual politics'…Therefore, Trump can say whatever he wants."

For his part, Ivan Konovalov, the director of the Moscow-based Center for Strategic Studies, pointed out that President Trump has a habit of making bold claims which aren't backed up by any facts. "The president of the United States has a tendency to use words lightly. Nothing new was said this time; after all, just recently, Trump declared that the US had defeated Daesh. But this is just ridiculous. The entire world knows who truly secured this victory: the coalition of Russia, Syria and Iran."

As for Trump's claim that the US would "go home" after Daesh was defeated, Konovalov said that this too contradicted the reality that the US military had built eight military bases on Syrian territory. "Who did they create them for? And he's saying he's going to leave? Perhaps Mr. Trump does not know the real situation, and doesn't know what the Pentagon and the CIA are actually doing in Syria. But this is unlikely."

Ultimately, Konovalov stressed that the real US goal in Syria is to prevent the full restoration of Syrian statehood, which would be possible only following the complete elimination of all terrorist groups, along with a search for consensus between Damascus and the Kurds.