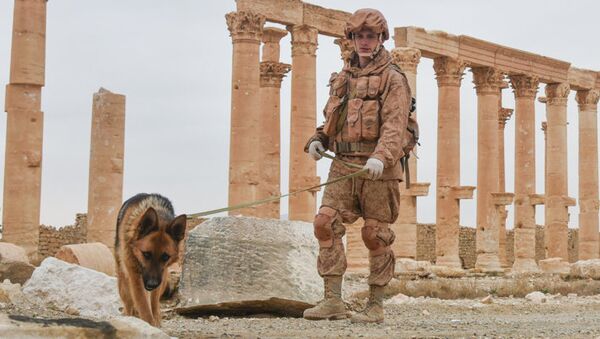 © Sputnik / Ministry of defence of the Russian Federation
/
Go to the mediabank
Subscribe
International
India
Africa
Ilya Tsukanov
All materialsWrite to the author
President Donald Trump has accused Russia, Iran and the Syrian government of causing a "humanitarian disgrace" in Syria, and said that the US military only remains in that war-torn country "for one reason: to get ISIS and get rid of ISIS and to go home." But let’s look at the facts.

On Saturday, servicemen from the Russian Defense Ministry's Center for Reconciliation distributed another party of humanitarian aid, this time in the western Syrian city of Homs. Through the course of its mission in Syria, Russia has delivered humanitarian assistance on almost a daily basis, distributing close to 27 tons of aid in the last week alone. According to a 2017 report, Russia delivered nearly 1,500 tons of assistance to the country over a one year period, including food, medical supplies, clothing, and other essentials. Last June, Syria received some 81,000 tons in Russian wheat aid. Aid deliveries have only intensified as the Syrian Army and its allies made progress to free the country from the jihadists.

Iran, for its part, has also provided massive quantities of aid to Syria, sending a whopping 1,000 tons of assistance to the population of the eastern Syrian city of Deir ez-Zor soon after the Daesh siege of the city was lifted last September, and hundreds of tons more before and since.

Boots (and Not Just Military Ones) on the Ground: Saving People & World Heritage

Alongside material aid, Russia has also sent doctors, medics and army sappers to the war-torn country to provide urgent care for the civilian population and to make their homes and streets safe following the Islamist militants' ouster.

As for the sappers, one of their most significant missions was the demining of Palmyra, the ancient city recognized by UNESCO as a World Heritage Site of global historical significance, after it was freed from Daesh in March 2017. Another was their mission to demine the city of Aleppo, Syria’s once de-facto economic capital and most populous city, where they found shells used by the militants which had been made in the USA and Germany.

Russia, Iran and Turkey have also deployed military police forces to the 'de-escalation zones' established in the course of the Astana peace talks (where the three countries serve as guarantors) to help keep the peace, and assist in the provision of humanitarian aid, provide training for local security forces, etc.

As alluded to above, Russia sponsored a broad range of peace initiatives, organizing talks in Sochi last month, cosponsoring several rounds of negotiations in Astana beginning in 2016, and working within the Geneva format ever since its inception. In fact, Russia has called for peace talks since the start of the Syrian conflict, proposing multiple formats for negotiations between the government and the opposition going back all the way to early 2012, before the war escalated, before the formation of Daesh, and before the destruction of so much of the country, the deaths of hundreds of thousands of Syrians, and the onset of the migrant crisis now afflicting Europe.

Hey US State Dept, Here's What Sputnik, RT Are Doing to End the War in Syria
Protecting Minorities

Before the war, Christians constituted about 10 percent of Syria's population; once fighting started, this minority faced particularly ruthless prosecution at the hands of the jihadists. Moscow's efforts have helped shield Christians and other minorities from total enslavement and destruction. In late 2015, after the Russian counterterrorism operation in Syria began, Syrian President Bashar Assad described the Russian president as “the only defender of Christianity one can trust,” a sentiment which has been echoed by Pope Francis.

Last but not least, the Syrian Army and its Russian and Iranian allies have done more than any other force to destroy Daesh's presence in Syria. Before Russia's anti-terrorist operation began in 2015, Daesh had been expanding amid what the US-led coalition described as its fight against terrorism, coming to control about 70 percent of Syria's territory. By November 2017, the Russian campaign helped to deflate the caliphate's Syrian holdings to about five percent of the country's territory. By early 2018, the Islamists' influence had shrunken to a few pockets in Syria and along the Iraqi border, including the Euphrates Valley, where the terrorists have resorted to using female fighters out of desperation.

President Trump may claim it was the US that destroyed Daesh in Syria all he wants, but the country's internationally recognized president has repeatedly underscored Moscow’s indispensable role in preserving the country's statehood and stomping out the jihadists.

Tehran: US Regularly Gives Daesh a Lift, It is Still a Threat
To sum up, in light of the longstanding Syrian, Russian and Iranian effort to stabilize the humanitarian situation in the country, to organize peace talks, and to destroy Daesh's barbarous caliphate and other terrorist groups, President Trump's claim about the countries causing a "humanitarian disgrace" is simply disingenuous, if not outright absurd.

US's One Goal in Syria is to Fight Daesh? Really?

As for Trump's other remark: that the US was in Syria for "for one reason: to get ISIS," this too is doubtful, in light of recent events.

If the US's mission in the country is really aimed at destroying the terrorists, how does that explain the Pentagon's propensity to 'accidentally' bomb the Syrian Army, often as the latter is advancing against Daesh? How does it account for Daesh getting its hands on sophisticated Western weaponry? What about the numerous reports of US-led coalition forces extracting Daesh commanders after they have been encircled by Syrian forces?

And what about the open and ongoing US support for the so-called moderate opposition, which a few brave investigative journalists in the West have admitted basically don't even exist anymore?

In fact, as the Syrian Army has moved ever closer to liberating the remaining areas of the country under Salafi-jihadist control, the US State Department, the Pentagon and Washington's European allies have begun to refer to the Nusra and Jaysh al-Islam militants in eastern Ghouta as 'rebels', rather than the terrorists they really are.

Surely President Trump, who so proudly proclaimed his commitment to fighting radical Islamic terrorism during the election campaign, realizes that the Nusra Front is al-Qaeda's branch in Syria. You know, al-Qaeda, the group responsible for the deadliest terrorist attack on US soil?

Ultimately, with Daesh and other terrorist groups now on the brink of total defeat in Syria, due for the most part to the efforts of the Syrian Army, Russian air power, and support from Iran, perhaps it's time for Mr. Trump to make good on his promise, and "go home."