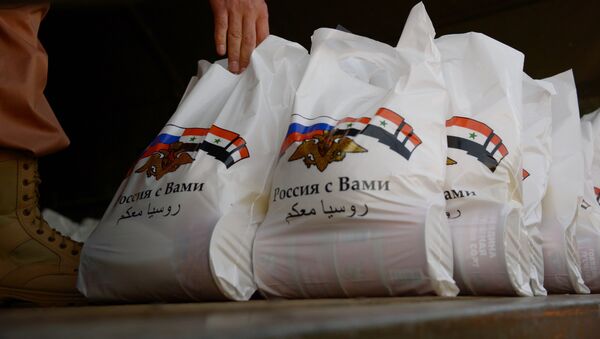 HOMS (Sputnik) - Servicemen of the Russian Defense Ministry's Center for Reconciliation of Opposing Sides in Syria on Saturday delivered clothing and blankets to one of the schools in Syria's western city of Homs.

The school, which was destroyed during the war, has been recently rebuilt. Russian soldiers were greeted by children wearing national costumes, as well as acrobatic performance, dances and Russian songs.

"Today, there are children from families, the members of which were killed or injured. The Center is also carrying out a medical examination, professional medics from Russia are providing counseling for children, which is very expensive in local hospitals, so once again Russia is extending a hand of friendship to the Syrian nation," the center's representative Dmitry Neutolimov said.

The school's headmaster noted that the main goal of terrorists was to "destroy the whole generation" in the Middle Eastern nation.

"But we continued the lessons. Children were very frightened during the shelling, mines were falling nearby [the school], cars were exploding. Thank you for helping to stop all this nightmare," the headmaster stressed.

Russian humanitarian convoys are sent to Syria almost on a daily basis. In recent days, the humanitarian assistance has been delivered to people in Homs, Hama, Deir ez-Zor and Latakia.

Syria has been engulfed in a civil war since 2011, with government forces fighting numerous opposition factions and terrorist groups. Russia, along with Turkey and Iran, are guarantors of the ceasefire regime in Syria.