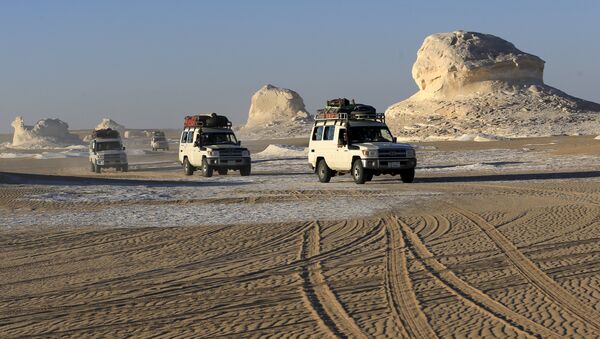 This is the latest in a string of discoveries announced in an area closely tied to the Late Period of the Pharaonic era and the Ptolemaic dynasty, which ruled Egypt following its conquest by Alexander the Great.

Egypt's Antiquities Ministry reported on Saturday to have discovered an ancient necropolis near the Nile Valley city of Minya, to the south of Cairo — a vast archaeological site on the edge of the western desert.

The family burial place hosts a number of family tombs and graves, including coffins and other funerary artifacts. The excavation work has just started, Antiquities Minister Khaled al-Anani said, and is slated to continue for the next five years at least.

One of the unearthed tombs includes more than 1,000 statues and four well-preserved alabaster canopic jars with hieroglyphic inscriptions, which had been specially designed to hold the mummified internal organs of their owner — a high profile priest of the mighty god Thoth.

The priest's mummy was also unearthed in a nearby location, adorned with blue and red beads and bronze gilded plates.

Archaeologists also uncovered 40 sarcophagi believed to house the priest's family members’ ashes, some bearing the names of their owners in hieroglyphics.

In early February, the 4,400-year-old tomb of Hetpet, an ancient priestess of Hathor, a goddess portrayed as a cow and associated with fertility, motherhood and love, was found in Egypt.

Sustainable Tourism: People Must Change Mindset About Being Cleaner - Specialist

Separately, in 2017, the ministry found a necropolis holding at least 17 mummies in the area of Tuna al-Gabal. The location is also known to include tombs, a funerary building and a large cemetery for thousands of mummified ibis and baboon birds, as well as other animals.

Egypt has been pinning a lot of hope on the recent discoveries across the country ultimately inflating the now-sagging tourism sector, with antiquities sightseeing being now prioritized after it plunged following the 2011 uprising and subsequent political quagmire.