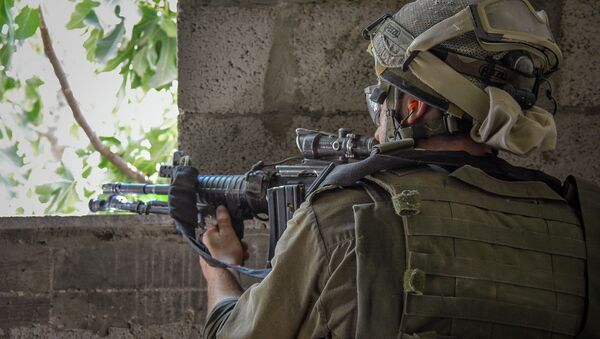 Security cameras captured video of Israeli Defense Force soldiers kicking and beating a Palestinian identified as Yassin al-Saradih repeatedly; medical examiners later pronounced him dead. Al-Saradih is from Jericho, a city in the West Bank, where he died.

According to the Palestinian Prisoner's Society, Saradih, 36, died shortly after the beating. The organization said he sustained multiple seizures while IDF troops fired heavy amounts of tear gas into a crowd he was in prior to his arrest and death.

The IDF's official statement declared that the man was shot after charging at the troops with an iron bar, and an autopsy reportedly discovered that the man had been shot in the stomach and that shrapnel was found near his tail bone. Haaretz reports, however, that while gunshots were heard, no gunshot wounds were found on Saradih's body, leading to the conclusion that he was physically beaten to death.

The Israeli military stated that a riot had broken out in the West Bank before a "terrorist armed with an iron bar charged at the soldiers and tried to attack them. The force responded with gunfire, confronted the terrorist from close range and managed to stop him. A knife was found in his possession. He was evacuated by the force from the scene to receive medical treatment. He was later pronounced dead."

A previous military statement announced that the man tried to attack soldiers with a knife, steal a gun, and that he was treated by medics on the scene. The military later retracted the statement.

The video does not show a man trying to steal a gun, but does show that Saradih carried what looks like a huge iron club.

​"This is the kind of day-to-day experience Palestinians have been going through, not just since 1967, but since 1948," journalist and author Max Blumenthal told Radio Sputnik's Loud & Clear on Friday.

Members of Saradih's family told Haaretz that Saradih was an active soccer player, worked all types of jobs from construction to agriculture and had not suffered from any medical ailments prior to his death.

The Palestinian Information Ministry "views [his] martyrdom… a cold-blooded execution."