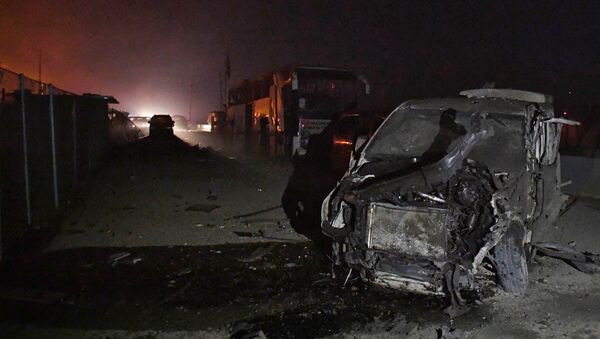 The Turkish General Staff has reported about the interception in Afrin of a convoy of 30-40 vehicles belonging to what they described as "terrorists and Kurdish militia groups."

A Kurdish source told Sputnik on Friday that the Turkish Armed Forces attacked at about 8 pm local time (18:00 GMT) a humanitarian convoy near the Syrian northern district of Afrin.

"One person was killed and seven others were injured as a result of the Turkish shelling of a humanitarian convoy and cars of residents going to Afrin in order to join the operation," the source said.

"Only the convoy belonging to PKK/KCK/PYD-YPG and Daesh terrorist groups was targeted during the operation, and utmost importance was given to not harm any civilians," Anadolu, a Turkish news agency, quoted the country's General Staff as saying.

However, according to the Syrian media, Turkish forces have destroyed an aid convoy which was on its way to Afrin and that casualties were reported.

The photos and videos of the alleged destruction have appeared online, showing burning vehicles.

On January 20, the Turkish military launched Operation Olive Branch against Kurdish forces in the district of Afrin, an area controlled by the US-backed Kurdish People's Protection Units (YPG) and Democratic Union Party (PYD).

Tweet: The consequences of Turkish forces shelling the Syrian convoy whih was en route to Afrin

Ankara considers them to be affiliates of the Kurdistan Workers' Party (PKK), which is designated as a terrorist organization in Turkey and several other countries.

Earlier this week, the Syrian state news agency SANA reported that a group of Syrian forces had arrived in Afrin to help Kurdish fighters repel a Turkish military operation.