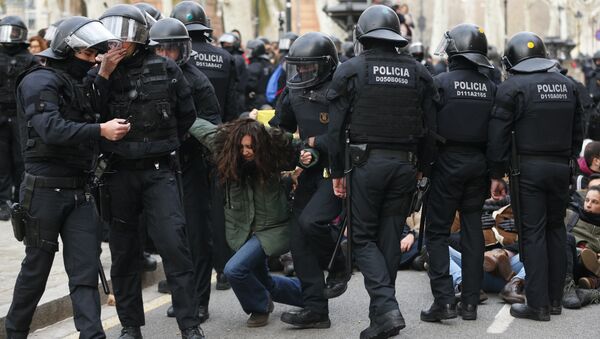 MOSCOW (Sputnik) - More than 10 people participating in a Friday rally near the building of Catalonia's High Court of Justice in Barcelona were detained by Catalan police, the Mossos d`Esquadra, local media reported.

About 100 people gathered in front of the court's building and chained themselves to the gates blocking the entrance of the institution for about an hour, the Mundo newspaper reported citing its own sources.

According to the newspaper, the action was dedicated to the anniversary of a coup attempt in Spain on February 23, 1981. The protesters also demanded the release of jailed supporters of Catalan independence from Madrid.

TWEET: This morning at the the High Court of Justice of Catalonia. Police accompanies 14 young people from the CDR to Inem to look for work. As expected, they have complained bitterly.

TWEET: All solidarity with detained colleagues! We will not build Republic if each action in defense of it does not prevent the repressive response! In case anyone was hesitating today they were the police who carried out the arrests.

TWEET: The police records all the faces of the people chained to the High Court of Justice of Catalonia. What democracy… We stop the coup! #SensePor # ConstruïmRepública

Spanish Citizens Party Leader Hopes for 'Common Sense' to Return to Catalonia
The media outlet reported that the event was organized by the Committees for the Defense of the Republic.

A number of Catalan residents were detained against the backdrop of the developments aimed at the region's secession from Spain. The majority of the Catalan voters backed the secession in the independence referendum on October 1. The plebiscite was not recognized by Madrid, which subsequently imposed direct rule over the autonomous region and dismissed its government. A number of Catalan officials, such as head of the Catalan Omnium Cultural Jordi Cuixar, and Catalan ex-Vice President Oriol Junqueras, were detained and arrested following the October vote.