Venezuela's 'Mega Elections': What Are the Scenarios? 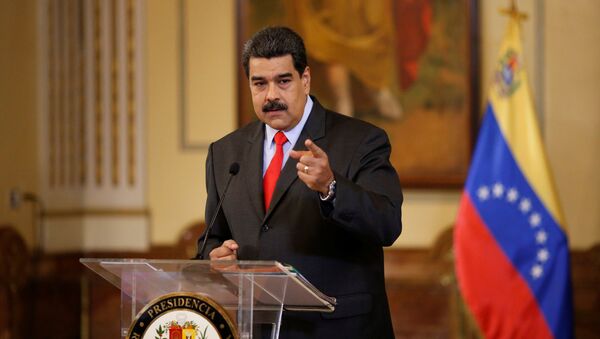 © REUTERS / Marco Bello
Subscribe
In a country rife with economic and political turmoil, Venezuela President Nicolas Maduro seeks to provide renewed hope by holding what he describes as mega elections. Sputnik spoke to Gabriel Hetland, assistant professor of Latin American studies, at University at Albany about this election and what it will mean for the country.

Sputnik: What do you make of Maduro saying he wants mega elections and what will this mean?

Gabriel Hetland: Diosdado Cabello who is one of the leaders of the ruling socialist party in Venezuela made this call within the last week or so, then Delcy Rodriguez whose head of the ANC which is the National Assembly, the controversial body that took office in august last year agreed to the call after Maduro repeated it. So it doesn't seem to be based in Venezuela's constitution, I don't see a whole lot of legitimacy for the calls, obviously the reason they could be doing it is to try to go around the National Assembly that is controlled by the opposition from late 2015 onward.

So by having a Mega Election they would be able to replace that. The opposition has declared a strategy of boycotting presidential elections and you could assume they would boycott the entire election if it was a so called mega election. The effect of all that would be to further decrease the governments legitimacy in the eyes of the international community and lead to the government further consolidation of political power in Venezuela.

Sputnik: How will the fact that opposition candidates won't be able stand for election impact the opposition?

Gabriel Hetland:  They certainly want to marginalize it, the leading opposition candidates and leading parties have been effectively side-lined from the process a number of candidates including the opposition presidential candidate in 2012 and 2013 Henrique Capriles is no longer allowed to run for office, that's been fairly widely criticized even amongst folks who used to be sympathetic towards the government or are still sympathetic in certain ways, because it was some corruption charges that haven't been proven, he hasn't had a trial, that's one of the grievous violations of political rights.

Sputnik: Will the economic crisis in Venezuela impact the vote at all?

Gabriel Hetland: I think it's quite possible you could see a protest vote of people in popular sectors, not coming out and voting for anyone, although Venezuelan's in Presidential elections typically have turned our very strongly, so I think it's a little uncertain to what will actually happen, there are polls but it's hard to trust the polls partly because so many things are in flux right now, but the economic crisis is very bad and very difficult right now. We did see some stirrings of popular discontent around Christmas around pernil, which is sort of meat Christmas dish in Venezuela, which the government had provided and promised to provide to the populous sectors, through the food program. They didn't end up coming, or didn't come on time or in the quantities that had been promised and so you saw food riots in many parts of the country.

So I think there are a lot of rumblings of popular discontent, there were some grass roots candidates in the elections in December with Venezuela that the government didn't always respect the popular will of, so I think that more than the opposition and how the popular class respond to the economic crisis is probably the most important pyrometer of the political change in Venezuela.

The views expressed in this article are solely those of Gabriel Hetland and do not necessarily reflect the official position of Sputnik.