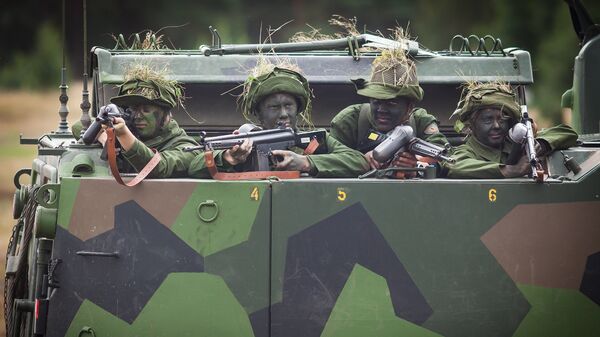 CC BY 2.0 / Håkan Dahlström / Swedish soldiers
Subscribe
International
India
Africa
"Only then will we be able to talk about a defense force that's robust and dangerous," government investigator Ingemar Wahlberg said, presenting a survey lobbying for a radical 40-percent budget hike.

A drastic increase in military spending would give Sweden a military with a sufficient deterrence capacity, a government investigation has found. A decline in the military's capacity would, by contrast, become "inevitable" after 2020, unless "large material investments" are made. Among others, Stridsfordon 9040 tanks will be over 30 years old after 2020.

As a sort of future guide for Swedish politicians, the investigation has assessed and ranked a large number of defense projects considered relevant. Implementing all of them would set the Swedish state coffers back a whopping extra SEK 180 ($22 billion) by 2030, without even counting increased staff expenditures, the Dagens Nyheter daily pointed out.

According to government investigator Ingemar Wahlberg, however, this would provide the Swedish defense with higher endurance, flexibility, impact power and better survival opportunities.

The Armed Forces' ambition is to be able to resist an attack against a highly qualified opponent for three months without relying on help from other countries. According to Wahlberg, the proposed changes would make the Swedish defense "very warlike" and would cost a tentative attacker a lot of money.

Sweden Discovers Spiraling Cost of US Patriot Air Defense
Should Swedish politicians prove unwilling to go all the way, the investigation has prioritized the defense projects into three levels in descending order of importance.

The pivotal priority would be to strengthen existing units by replenishing their inventory and using it to the maximum. Additionally, the first step would entail more coastal missiles and an enhanced naval and amphibian capacity. Sweden would retain its five submarines and focus on artillery and air defense. Combined, these measures would cost SEK 56 billion ($7 billion).

The second step, costing SEK 65 billion ($8 billion), would put a strong emphasis on fighter aircraft, strengthening sensors, radar equipment and weapons. Additionally, Sweden's air force would be spread across the nation to become less vulnerable to attacks from abroad. Wahlberg described the Swedish Air Force in its current state as "vulnerable."

In the third step, costing SEK 47 billion ($6 billion), emphasis will be put on the Navy, procuring more submarines, as well as artillery for the ground forces.

However, the investigation also proposed an adequate re-prioritization, should the Swedish leadership prove unwilling to take the proposal hook, line and sinker. Above all, the purchase of the US Patriot air defense system is advised to be postponed, which would free up SEK 12 billion ($1.5 billion) for maintaining existing equipment and procuring basic equipment for 50,000 soldiers. At present, the Swedish Armed Forces number around 20,000, down from 180,000 during the 1980s.

Lastly, the investigation also estimated that defense measures planned by parliament for the period 2016-2020 are underfinanced by at least SEK 6 billion ($0.75 billion).

According to Liberal party defense policy spokesman Allan Widman, the investigation doesn't leave Swedish politicians any other choice but to go all out.

"It is a harsh and honest message delivered," Widman said, as quoted by the Sydsvenskan daily.

The right-wing Sweden Democrats, who strive to cancel the purchase of the Patriot missile system and favor other solutions, also welcomed the investigation.

In Sweden, which is currently still non-aligned despite increasing cooperation with NATO, military spending has dwindled from 3.1 percent of GPD in 1981 to a mere 1.1 percent in 2015, when it started to crawl upward, in a bid to match NATO's goal of 2 percent. According to Dagens Nyheter, Sweden's total military expenditure is projected to rise from SEK 37.5 billion ($4.6 billion) in 2015 to SEK 53.4 billion ($6.6 billion) in 2019.