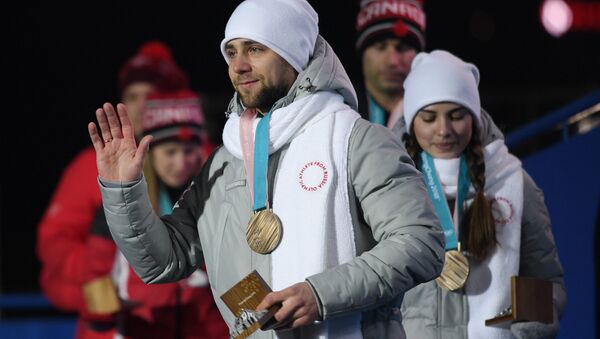 MOSCOW (Sputnik) — The bronze medal earned by Russian curler Aleksandr Krushelnitckiy with his partner Anastasia Bryzgalova at mixed doubles curling at the 2018 Olympics was handed to the International Olympic Committee (IOC), while the athletes have already left South Korea, the Olympic Athletes from Russia (OAR) delegation said in a statement.

"The bronze medal earned by the pair Bryzgalova/Krushelnitckiy was handed to the International Olympic Committee (IOC). The athletes have already left South Korea. The results of doping tests taken at the Olympic Games are not contested. As part of the further investigation, comprehensive work will be conducted with the participation of law enforcement agencies, the Curling Federation of Russia and athletes to establish all the circumstances of this case. The Russian Olympic Committee, for its part, will provide the necessary assistance," the OAR statement read.

On Tuesday, the OAR delegation said Krushelnitckiy had been tested positive for prohibited substance meldonium in his doping sample B. The Russian Curling Federation said it would refer to IOC, the Organizing Committee, and the World Curling Federation with a request to provide footage from CCTV cameras in the Olympic village to investigate the doping scandal.

The discovered amount of meldonium in Krushelnitckii's doping probe showed substance had been used only once. On Wednesday, Krushelnitckii refused to participate in the hearings before the Court of Arbitration for Sports (CAS) in this case, acknowledging the fact of a formal violation of the anti-doping rules.