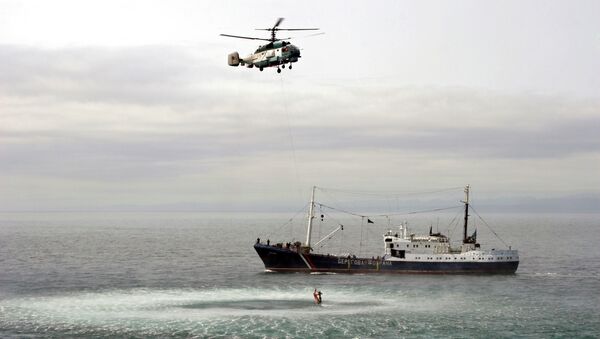 "Branding this as a ferocious gangster-like act aimed to tarnish the hard-won atmosphere for the improvement of the North-South ties and for peace on the Korean Peninsula, and as a dangerous military provocation to ignite the train of a war," the [North's] Korean National Peace Committee said in a statement, announced by state-run Korean Central News Agency (KCNA) and quoted by South Korea's Yonhap news agency.

The statement was made after on February 15, the Japanese Defense Ministry announced that this year’s joint ballistic missile defense exercise, which is due to start on Friday and last for a week, would have a larger scale than the previous ones and involve not only the Japanese Maritime Self-Defense Force and the US Navy but also the two countries’ air force units and the US Marine Corps. The ministry stressed the importance of the drill, citing November's North Korean ballistic missile activities.

The committee also noted "greater bellicosity" and the danger of the forthcoming exercise, pointing to the planned involvement of fighter jets and US marines.

Tensions on the Korean Peninsula have further escalated as North Korea achieved significant progress in its nuclear and missile programs last year. Pyongyang tested several ballistic missiles, including its most advanced intercontinental ballistic missile in November, which it said was capable of hitting any part of the mainland of the United States. In turn, Washington has led a number of diplomatic initiatives to put pressure on Pyongyang and held several drills in the region.

In January, Pyongyang and Seoul resumed bilateral talks ahead of the Pyeongchang Winter Olympics. As a result, their national teams marched together under a "unification flag" at the opening ceremony and are jointly participating in a number of sporting events.

The sides also reportedly agreed to delay their military activities until after the Olympics, which will last through Sunday.