Activist: Time to ‘Formally End the Korean War’ After 65 Years of Armistice 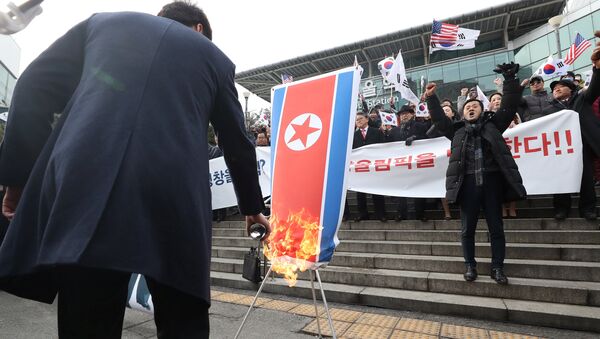 The brief respite on the Korean Peninsula seems fated to end with the Winter Olympics in Pyeongchang after North Korean leaders canceled a planned secret meeting with US Vice President Mike Pence. Washington is also expected to soon resume postponed military exercises alongside South Korea, exercises that North Korea has labeled provocative.

​Brian Becker and John Kiriakou of Radio Sputnik's Loud & Clear were joined by Christine Ahn, a co-founder of the Korea Policy Institute, a think tank that advises American politicians to foster diplomacy and friendship with both Koreas, as well as the International Coordinator of Women Cross DMZ, an organization of peace activists.

"I feel like we're in a funhouse with a lot of smoke and mirrors and doublespeak and confusion, especially coming from the Trump administration," said Ahn. "This spin coming from the White House that it's North Korea that canceled the secret meeting, but [the US] were also noting that they were just going to reiterate their hardline stance — which they publicly did in Tokyo as [Pence] was meeting with [Japanese Prime Minister Shinzo] Abe."

"As for the military exercises — I have heard different things. I have heard that South Korea has now been in conversation that they will consider stalling the military exercises, and we have the US jumping the gun and saying that the exercises are going to resume. We are in a critical window and it is urgent now for the US peace movement to raise our voices and to say we must support the inter-Korean peace process that is underway."

In response to North Korea's myriad missile tests, the US, South Korea and Japan launched a series of military exercises on and near the peninsula. This includes December air drills between the US and South Korea that involved hundreds of aircraft, including nuclear-capable B-1B bombers.

"The national security law in South Korea [considers] any contact with North Koreans to be a threat to their national security," said Ahn. "I think you have a situation where South Korean President Moon Jae-in, who has gone to the 2007 summit in North Korea, having his mother come from the northern part of the Korean Peninsula before it was divided, deeply understands the complex situation that South Korea is in."

"They have this 'alliance' with the US which includes wartime operational control over South Korea's military. I think you also have… this older generation, who are maintaining that Cold War paradigm that has really hobbled the advancement of South Korean democracy."

"It's a historic moment, we know that. [Moon] has said he is trying to get a peace treaty between the US and North Korea, as promised under the armistice agreement that was signed in 1953."

The agreement that ended hostilities on the Korean Peninsula, was not a peace treaty, merely an armistice, so the Korean War technically continues 65 years later. While the stated intention of the armistice was to eventually replace it with a permanent peace treaty, attempts to actually do so have never gotten far.

"It's time right now for Americans to really put pressure on our government to formally end the Korean War," said Ahn. "Not just for the Korean people, but also for the soul of this nation."