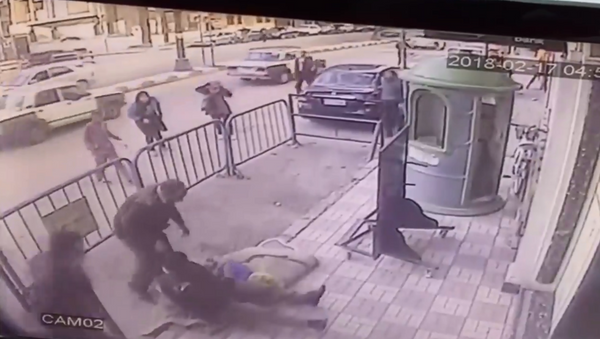 © Screenshot/الصفحة الرسمية لوزارة الداخلية
Subscribe
On Monday, Egypt's Interior Ministry shared security footage showing the moment that three police officers worked together to rescue a five-year-old who fell from the balcony of a third floor apartment.

According to reports, Kamil Fathi Jaid, Hassan Sayed Ali and Sabri Mahrous Aziz spotted the boy dangling from the balcony while they were guarding a nearby bank in Asyut, Egypt. The three officers quickly sprang into action — one kept an eye on the child, another used a carpet as a safety net and the third officer rushed to alert other officials.

Thanks to Jaid's close watch on the child, he was able to catch the boy when he fell, though the impact knocked them both to the ground. The child was unharmed, but Jaid sustained minor injuries, according to NDTV. He was later taken to a Asyut police hospital for treatment.

It is unclear how the child wound up on the balcony or where his parents were at the time of the incident.