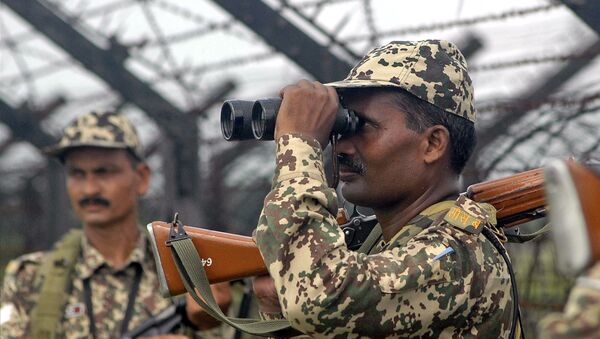 Siliguri, the only corridor that connects India's northeastern states to the rest of the country, feeds the primary military formations which would counter China in the event of a conflict. India fears that the frequent transgressions by the Chinese PLA are part of a plan to strangle this corridor.

New Delhi (Sputnik): In a rare admission of the vulnerability of the strategic Siliguri corridor, whichconnects India's northeast to the rest of the country, navy chief Admiral Sunil Lanba has raised serious concern over frequent transgressions by Chinese troops into areas that are close to the corridor. The corridor, also referred to as the 'chicken's neck,' if choked, would cut off all supplies to the northeastern states hosting military formations that would counter China in case of war.

"Frequent instances of transgression by the Chinese PLA across the Line of Actual Control (de facto border) and the recent standoff at Doklam are indications of increasing assertiveness of China, as it makes rapid progress economically and militarily. Recent developments have also underscored the vulnerability of the Siliguri Corridor," Admiral Sunil Lanba said.

Meanwhile, the Indian Navy has reportedly deployed at least eight warships in the East Indian Ocean to track Chinese naval forces, which recently conducted a military drill in the open sea.

Frequent instance of transgression by PLA across LAC&recent standoff at #Doklam are indication of increasing assertiveness of China,as it makes rapid progress economically&militarily.Recent developments have also underscored vulnerability of Siliguri Corridor:Chief of Naval Staff pic.twitter.com/8Mu7la8g9B

​On Tuesday, the Chinese news portal Sina.com.cn reported that eleven Chinese warships, including a fleet of destroyers and at least one frigate, sailed into the East Indian Ocean this month without making any concrete indication of the deployment regarding the crisis in the Maldives.

"If you look at warships and other equipment, the gap between the Indian and Chinese navy is not large," Sina.com.cn said.

Rousing Water Conflict: India Suspects China of Disrupting River Sutlej Flow
However, the Indian defense ministry has denied the report, saying that no Chinese warship had come near the waters of the Maldives since political turmoil broke out in the island-nation.

Indian Navy spokesperson Captain D. K. Sharma told The Indian Express, "We have a very robust surveillance system in the Indian Ocean region, which is supported by mission-based deployment in place since July 2017."

As part of the mission-based deployment, at least 11 Navy vessels are deployed at various strategic locations for maritime domain awareness. Sources confirmed the entry of a Chinese Navy task force into the Indian Ocean from the Sunda strait but that was for training exercises in international waters, closer to Australia and has since left via Lombok Strait.