Traders Are Bullish on Bitcoin Rival Ethereum, Here Is Why 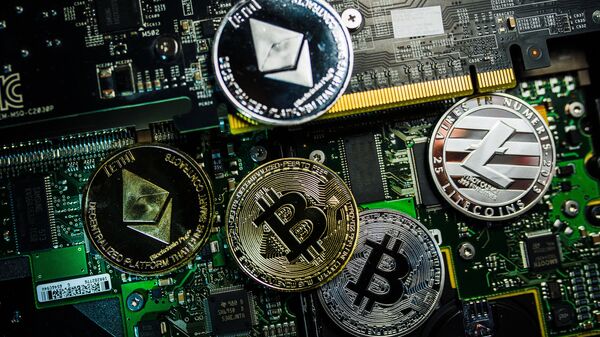 © Sputnik / Evgeny Biyatov
/
Go to the mediabank
Subscribe
International
India
Africa
The price of the world’s 2nd most valued cryptocurrency, Ethereum, on Wednesday dropped below $870. However, cryptocurrency experts bet on the coin’s long-term chances.

Ethereum largely held steady at around the $900 mark this month, apart from a major drop to $585 on February 6 and an incredible rise to $979 on February 18. Today Ethereum suffered losses again, but so did other cryptocurrencies after President Nicolas Maduro said on Twitter that Venezuela's petro token raised $735 million in the first day of a pre-sale.

Hedge-Fund Founder Who Devastated Argentina Calls Bitcoin Immoral
According to cryptocurrency analysts with the Canadian financial outlet Profit Confidential, Ethereum price is expected to significantly grow over the longer term.

Ethereum is currently used as a platform by a wide variety of ICOs as well as other cryptocurrencies. Many corporations are using its smart contracts capability in order to create their own products. Experts believe that as the platform becomes widely used, it will gain more and more movement and this will increase the price of the cryptocurrency.

The problem with the ICOs is that they are unregulated and there is nothing to stop a company from escaping with someone else's money. In most countries it will be almost impossible to hold the culprit to account or win back investors' money.

World
Experts Ponder Impact of Ripple's Global Expansion on XRP Rate
But Vitalik Buterin, Ethereum co-founder, has found a solution to the problem. The idea comes from Ethereum's "decentralized autonomous organization" (DAO). Although the first DAO effort ended in absolute fiasco — a glitch allowed a hacker to steal $60 million,-- a new project called The Abyss is reviving the DAO concept with necessary improvements. The Abyss can't simply accept investors' cash and disappear; investors can withdraw at any point and get their money back.

"The intention is that the voters start off by giving the development team a reasonable and not-too-high monthly budget, and raise it over time as the team demonstrates its ability to competently execute with its existing budget," Vitalik Buterin said in a blog post.

As the decentralized usage of the platform becomes more popular, the demand for the cryptocurrency will also increase, analysts claim, adding that Vitalik Buterin "has proven to be wise beyond his years".

Most of the cryptocurrency enthusiasts are bullish on Ethereum and believe that by July 2018 its rate will exceed $1,500.