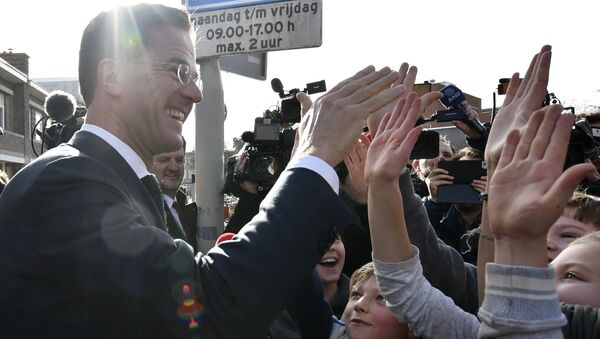 Neil Clark
All materials
Dutch Foreign Minister Halbe Zijlstra has resigned having admitted that he lied about being at a meeting in 2006 in which President Putin allegedly talked about wanting to build a ‘Greater Russia'.

But just as shocking has been the Dutch Prime Minister's response. Mark Rutte, in charge of his country since 2010, knew about Zijlstra's mendacity two weeks earlier, but didn't sack him. Not only that but he defended his Foreign Minister in Parliament by saying that his remarks reflected reality.

Dutch tweeps ridiculing their foreign minister Halbe Zijlstra after he admits lying about meeting Putin in 2006. Here some examples>😂😂😂 pic.twitter.com/ysB8gnKdIL

"If you look at what Russia has done in the past 10-15 years, the policy that they have followed, you must say that it's aimed at expansion," Rutte said.

Which begs the question: which planet has Rutte been living on? The answer has to be Planet Neo-Con. Because only from there could you say that it's been Russia that's been following a policy aimed at expansion- and not the US and its allies.

Let's do what Rutte suggests and go back 15 years. To February 2003. The US and the UK, having taken the lead in the illegal bombardment of Yugoslavia four years earlier and having invaded Afghanistan in 2001, are preparing for yet another war. Despite millions of ordinary citizens marching against it, and crying ‘Not in My Name!', they are about to launch an illegal invasion of Iraq on the fraudulent grounds that the country possesses WMDs which can be launched within 45 minutes. Did Russia support this war of aggression against a sovereign state? No, it opposed it. Putin even ridiculed the WMD claims, and was right to do so.

In 2011, the US and its NATO allies launch another assault, this time on Libya. Was Russia involved in this military operation — which effectively knocked the country with the highest Human Development Index in the whole of Africa in 2009, back hundreds of years? Once again, 'Nyet'.

Just after Libya, the US and its allies began to massively intervene in Syria, backing 'rebels' — many of whom were linked or associated with al-Qaeda and other hardcore militant groups, to try and overthrow the secular government in Damascus, a long-standing ally of Russia.

If Russia felt threatened by this and sought to block the US plan, then it's not surprising.

One by one, countries that were friendly to Moscow have been picked off.

And Rutte accuses Russia of expansionism?

This is before we even get to the subject of NATO's Drang nach Osten. The promises given to Soviet leader Mikhail Gorbachev in the early 1990s about NATO not expanding into the countries of the Warsaw Pact weren't worth the paper they weren't written on. NATO did expand, right up to Russia's borders. Just imagine if the process had been reversed- and that in 1991 it had been NATO and not the Warsaw Pact which had been disbanded and that over the next few years, the Russian-led military alliance had come right up to the USA's borders, taking in Mexico and Canada. Would Mark Rutte be saying that remarks about a 'Greater US' being built reflected reality? Of course not.

To add insult to injury, the very limited and restrained steps Russia has taken in response to the West's aggressive policies, have been depicted as acts of aggression themselves by the neo-con war lobby.

Let's think back to August 2008. Then, under the cover of the opening of the Beijing Olympic Games, the US-backed, tie-chewing Georgian leader Mikhail Saakashvili launched an attack on the  South Ossetian city of Tskhinvali and Russian peacekeepers stationed there. Russia responded by to this by sending in its troops, but interestingly those who most loudly supported the right of western countries to launch ‘humanitarian interventions' to save civilians, denounced Russia's actions as ‘aggression‘. Without any sense of irony, President George W. Bush, the man who had attacked and destroyed Iraq in blatant contravention of international law, said that Russia's ‘invasion of a sovereign state' was ‘unacceptable in the 21st Century'.

Once again, it didn't take long for the neo-con version of events to be exposed as fraudulent. In 2009, an EU report declared: 'There is the question of whether the use of force by Georgia in South Ossetia, beginning with the shelling of Tskhinvali during the night of 7/8 August 2008, was justifiable under international law. It was not'. The report also stated:  There was no ongoing armed attack by Russia before the start of the Georgian operation. Georgian claims of a large-scale presence of Russian armed forces in South Ossetia prior to the Georgian offensive on 7/8 August could not be substantiated by the Mission."

Then, in 2014, we got the US-backed regime change operation in Ukraine. Senator John McCain and Vicky Nuland of the US State Department went to Kiev to show their support for anti-government protestors.  Again, just imagine the furor if leading Russian politicians had flown over to New York to hand out cookies to Occupy Wall Street protestors. The truth is that they wouldn't even be allowed into the country.

With hard-right ultra-nationalists and some bona fide neo-Nazis providing the cutting edge to the anti-government protests, it was no surprise that Ukraine's large Russian minority felt threatened by developments.

The people of Crimea, the province which had been part of Russia for almost 200 years prior to it being handed to the Ukrainian SSR by the Soviet government in 1954, voted overwhelmingly in a  referendum to return to Russia. Yet once again this defensive act- taken in reaction to the events in Kiev- was described as ‘Russian aggression' or even a ‘Russian invasion of Ukraine'.

Today the same inversion of the truth goes on when it comes to the 'threat' posed by Russia to the west. There is great focus whenever Russia holds its 'war games', but less on when NATO does the same. Not only is there no historical perspective to explain why Russians might feel anxious, namely that 27m Russian and Soviet citizens were killed in World War Two following an invasion from its western borders; there is also no mention of military budgets. Since 2001 the US has spent around 10 Trillion on 'defence'. In December, President Trump signed a new Act which authorized nearly $700m for defense spending in the next fiscal year- a 4.7% increase.

At the same time, Russia's military spending has been decreasing- and is below not only that of the US, but India, China, Saudi Arabia and the UK.

Yet it's Russia that we've got to be worried about.

In Syria, it's the same. We're meant to focus obsessively on the Russian military's defensive actions in support of the beleaguered secular government, (which is framed in terms of 'Russia propping up the evil dictator Assad')- but not on what has made Russia's lawful intervention necessary: namely the attempts by to the US and its regional allies to topple a government which didn't do its bidding, with terrorist proxies.

Let's not forget the declassified secret US Intelligence report from 2012, (Section 8C) which discussed the ‘possibility of establishing a declared or undeclared Salafist principality in eastern Syria‘, saying that ‘this is exactly what the supporting powers to the opposition want, in order to isolate the Syrian regime'.

At the time Russia intervened in Syria in September 2015, after an official request for assistance from the Syrian government, the genocidal, misogynistic head choppers of  ISIS/Daesh were perilously close to Damascus- where women could go out together, put on make-up and smoke sheesa pipes in public.

"Daesh was threatening the possibility of going to Damascus and so forth. And that's why Russia went in," admitted US Secretary of State John Kerry, on a leaked tape.

The big story of the last 10-15 years in international affairs is not an attempt to build a 'Greater Russia', but the actual building of a Greater NATO. That is the story that reflects reality, because it's true. But which western politicians, I wonder, will have the courage to come out and say this?

000000
Popular comments
"in 2014, we got the US-backed regime change operation in Ukraine" Do not forget that DUTCH politicians, the most trusted dogs of the US Evil, were in the first line in the maidan square chanting with their junta friends.
jameskees
21 February 2018, 20:00 GMT2
000000
The Dutch politicians & sadly a majority of the Dutch people have been lying to themselfs about so many things over the last few decades or so, that they can't see the forrest trough the trees. From their involvement in the Srebrenica hoax, their support over various wars (like bombing Yugoslavia) to the downing of flight MH17 ( 193 Dutch died on that flight), the lies surrounding these events have become truths to the Dutch & they have paid a heavy price for it in lives & money & their good reputation.