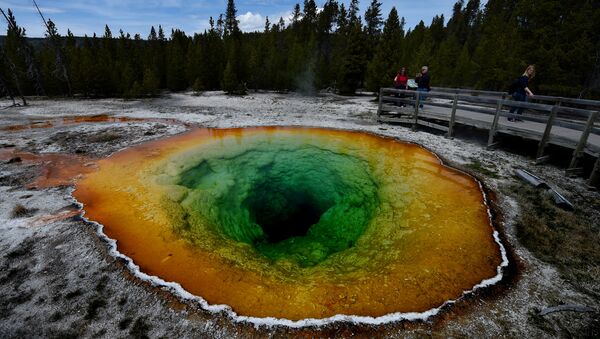 The last massive earthquake in Yellowstone National Park claimed the lives of 28 people and created a whole new lake. An eruption of a supervolcano like the one at Yellowstone could render significant part of the US uninhabitable for years and threaten life on the whole planet.

Over 200 tremors have struck the Yellowstone supervolcano over the past few days, while normally only 1,000-2,000 tremors occur during a year. The latest quakes were just 2.9 in magnitude on the Richter scale, but the Yellowstone Volcano Observatory warned that a bigger earthquake of magnitude-7 potentially coming in the near future.

Such unusual intensification may be connected to the 7.5 magnitude 1959 earthquake, when a huge landslide took the lives of 28 people and led to the creation of Quake Lake. But it is not the earthquake that is troubling, it is the possible eruption. With a huge magma chamber situated beneath the giant 55 by 72 kilometer Yellowstone Caldera, the amount of ash that would be erupt into the atmosphere may kill all life in the western US by blanketing the skies within hours, blocking out the sun and changing the climate on the whole continent, according to research by Ilya N. Bindeman, professor at the Earth Sciences Department at the University of Oregon.