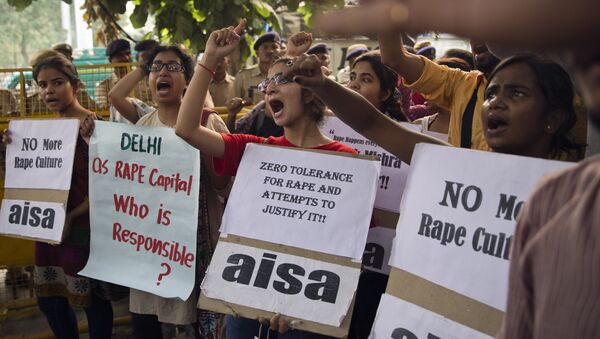 In a horrific incident of mob justice, 1,000 people protesting the rape and murder of a minor stormed the police station, dragged out the two accused and lynched them. The incident happened in Lohit district of India's northeastern state of Arunachal Pradesh after the body of the five-year-old rape victim was found in the jungle on Sunday.

New Delhi (Sputnik): The two men accused of raping and murdering a five-year-old girl and dumping her in the jungle were reportedly lynched by people armed with hammers, iron rods and sticks after parading them naked on the streets.

"A mob of nearly 1,000 people attacked the police lockup and took away the two accused. Some policemen have also sustained injuries in the attack," Aaid Apur Bitin, Deputy Inspector General of the state told to local media.

The two accused — Sanjay Sobor (30 years) and Jagdish Lohar (25 years) — had been arrested at the Tengapani tea garden area on Sunday by state police for allegedly raping and murdering the girl on February 12.

Local media reported that the two accused had confessed to having raped and murdered the girl before dumping her in the jungle.

The Arunachal Pradesh government, ruled by the Bharatiya Janata Party, has condemned the rape and murder of the minor calling it a "barbaric and inhuman" crime, but has insisted on a detailed inquiry into the mob lynching.

"We are citizens of a great country who abide by the law enshrined in the constitution. Our laid-down rules and regulations do not allow us to take the law into our hands and so have placed the police and judiciary," Pema Khandu, state chief minister said.