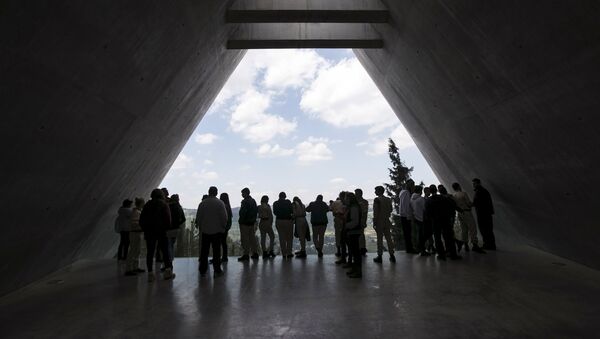 © REUTERS / Baz Ratner
Subscribe
The Ruderman Family Foundation, an American Jewish philanthropic organization, recently initiated a campaign calling for the US to dissolve its ties with Poland over the country’s controversial new law that makes it illegal to accuse the Polish nation of complicity in Nazi crimes during World War II.

The campaign includes a petition for the US to suspend its ties to Poland on the NeverDeny.org website. The site also reportedly included a video message showing men, women and children saying "Polish Holocaust," according to Times of Israel. Other footage showed people asking about time spent in a "Polish prison." However, the footage is currently unavailable on the website or YouTube.

The contentious law, recently signed by President Andrzej Duda this month, is due to take effect February 28. However, the law is to be reviewed by Poland's constitutional court since it has generated much criticism.

The law makes it a crime punishable by up to three years behind bars to claim that the "Polish state" was to blame for or took part in Nazi crimes. The law also allows the Institute of National Remembrance, a research organization that specializes in the legal and historic examination of Poland, to demand compensation from any individual or organization that "falsifies" Polish history.

On Tuesday, Polish Deputy Foreign Minister Bartosz Cichocki said on TVN24 that Poland will "react, demand clarifications, argue against them" [false accusations of involvement in the Holocaust]." However, he also added that "no means of prosecution will be implemented."

According to the Times of Israel, several Jewish organizations, among them Yad Vashem, the Holocaust museum in Israel, along with the US Department of State, the French Foreign Ministry and the Israeli government, have criticized the law.

"This law is liable to blur historical truths due to limitations it places on expressions regarding the complicity of segments of the Polish population in crimes against Jews committed by its own people, either directly or indirectly, on Polish soil during the Holocaust," Yad Vashem said in a recent statement, the Jerusalem Post reported.

However, the museum noted that the phrase "Polish death camps" is erroneous since the concentration and extermination camps were operated by Germans in Nazi-occupied Poland.

Earlier this month, US Secretary of State Rex Tillerson condemned Poland's new legislation in a statement.
"The US is disappointed that the president of Poland has signed legislation that would impose criminal penalties for attributing Nazi crimes to the Polish state," Tillerson said.

"We understand this law will be referred to Poland's Constitutional Tribunal. Enactment of this law adversely affects freedom of speech and academic inquiry," Tillerson added.

000000
Popular comments
now here's where personal or even cultural priorities collide with reality. What are the diverse tendrils connecting the two countries? What necessitates the use of poland by the usg to manipulate brussels as one simple example? Does this group actually expect for their calls to be heeded? Some clear thinking is needed in this situation.
michael
22 February 2018, 02:54 GMT
000000
FeEisi, stop making propaganda with baseless claims