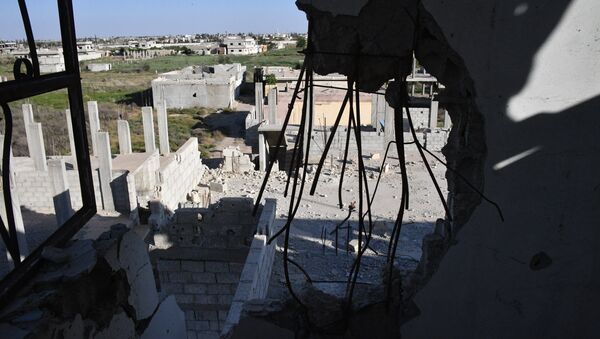 Russian Defence Ministry announced on Wednesday that peace negotiations in Damascus suburb of East Ghouta have been derailed.

Russian Center for Syrian Reconciliation reported that appeals to illegal armed groups to cease resistance and surrender arms were unsuccessful. Also, Russian military said that critical humanitarian crisis was underway in the region.

"The humanitarian and socio-economic situation in East Ghouta is getting critical. The appeals by the Russian reconciliation center to illegal armed groups to stop resistance, surrender arms and regulate their status did not bring positive results," spokesman Maj. Gen. Yuri Yevtushenko said in a statement.

"The negotiations for the peaceful settlement of the conflict in East Ghouta have been derailed," Yevtushenko stressed.

Over 1,400 Families in Eastern Ghouta, Syria, Will Receive Aid - SARC
Earlier, Russian Deputy Foreign Minister Sergei Ryabkov said that Russia was working within the UN Security Council to prepare a resolution on humanitarian issues in the suburb, adding that the humanitarian issues in Syria were a clear example of Washington’s double standards.

Kremlin responded to allegations by saying that the accusations were groundless, noting that it was not clear on what they were based and no specific data was provided.

The Eastern Ghouta de-escalation zone was created during the Astana talks on Syrian reconciliation along with three other zones. The guarantors of the de-escalation agreements are Russia, Iran and Turkey.