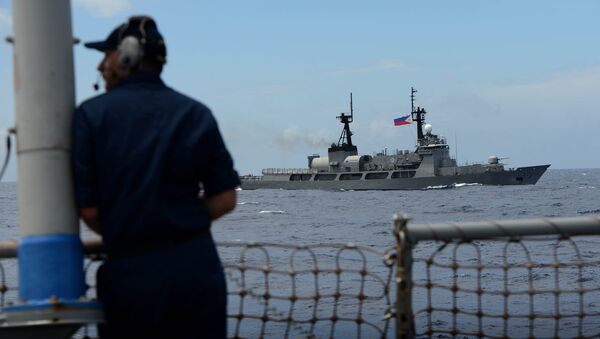 © AFP 2023 / NOEL CELIS/POOL
Subscribe
International
India
Africa
The US, Australia, India and Japan have reportedly been negotiating to establish a joint regional infrastructure plan to counter China’s Belt and Road Initiative. The plan comes in a bid to counter Beijing’s increasing influence. Radio Sputnik spoke with Stuart Orr, Professor at the Faculty of Business and Law, Deakin University, Australia.

Sputnik: How realistic is this plan by the United States and its allies to establish a joint project that could compete with China?

Stuart Orr: I think it’s quite realistic because the combined countries got plenty of resources in the area and they also have got existing trade arrangements with one another, so that’s certainly going to facilitate the establishment of this sort of alternative infrastructure and trade routes. There is a lot of economic power of course, particularly in the US and Japan, so there is a lot of economic strength there and also geography and that part obviously refers to the geographic coverage, so the potential there is quite strong to create some alternative routes. There are certainly the capabilities, I think, and are quite substantial as well.

READ MORE: New Belt and Road Initiative: China's Silk Road Challenged by US and Its Allies

Sputnik: What impact could this have on the Chinese project?

Stuart Orr: There is a lot of care being taken not to go too far because China is a major trading partner also for these countries, so they really can’t afford to annoy China too much. I think it is more about achieving a degree of balance and providing some alternatives to keep the trade activities, particularly, in balance. There is a sort of implicit advantage, I think, to the quoted countries, because they will be focusing on existing and well established trade routes, such as the [Malacca straits] and, of course, the South China Sea.

Whereas China’s Belt and Road initiative is essentially a new infrastructure construction, spanning a number of countries, and so it has to be developed. Whereas, the quoted countries’ approach is more about retaining what already exists.

READ MORE: Australia Unlikely to Support US Openly in Case of China-US Conflict

Sputnik: Some experts have said it remains unclear whether the countries will have enough cash to invest in the project. It is interesting to hear your take on this.

Stuart Orr: I guess the positive for each of the countries is that the investment is going to be on shore. So it is going to provide with a direct economic stimulus for each of the member countries as opposed to being spent on a combined unilateral activity and where they may or may not be able to root out the advantage. So the following infrastructure that they are going to develop will help those countries independently, as well as creating the cooperative infrastructure arrangement.

It’s going to be very attractive. I don’t think Japan, for example, would be struggling. India certainly wouldn’t be struggling. Australia’s contribution, I think, because of the size of the economy will be significantly less. The US is probably the only one, but again there is an economic stimulus that I can see, that there is some inherent advantages to it as well.

Sputnik: US President Donald Trump is being more interested in seeking returns from the region; do you think Washington will want to invest in this project?

Stuart Orr: It is certainly counter to a lot of the emerging policies, on the other hand Trump is a good businessman and I think that he sees, and he will be able to see good opportunity. Certainly that region in the world is growing dramatically; apart from China you have got a rapid economic development. India is creating huge demand, other countries, Vietnam and Indonesia all moving rapidly into growing so that they have large middle class sectors creating huge demands and huge opportunities, so it’s probably an opportunity that few large economies could afford to overlook. So I think in terms of future trade opportunities it would have to be very much still on the US radar.

Sputnik: Now some analysts have said that nations can use this project to exert pressure on Beijing such as the issue regarding the ongoing disputes in the South China Sea. Is this likely to be true?

Stuart Orr: I think this is a fairly clever way of responding basing the capability on the basis of trade rather than military action as the first objective. It provides a good opportunity, again coming back to this issue of balance, to create a little more balance in the region. Certainly the trade routes that we just talked about, the [Malacca straits] carrying a huge volume of world trade and the South China Sea really are really too valuable to these countries for them not to be able to at least provide some protection for their own trade routes. So having a fiscal presence and having trade activities in that area creates a really good basis for exerting a little bit more control over what goes on and having a little bit more information, and being able to manage those issues a little bit better, than the current sort of confrontational approach that is being taken.