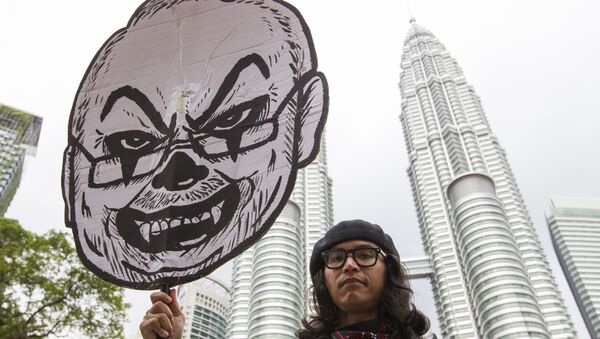 On Tuesday, a Malaysian court announced that one of its citizens will be jailed for a month for publishing a caricature of Malaysian Prime Minister Najib Razak looking like a clown in 2016.

Artist Fahmi Reza's illustration of Razak with powder-white clown makeup, arched eyebrows and red lips went viral after he published the it on his Facebook page. The image was also extensively used in demonstrations against Razak following allegations that the prime minister looted billions of dollars from a sovereign wealth fund called 1Malaysia Development Berhad (1MDB). The prime minister continues to profess his innocence.

According to his lawyer, Reza was imprisoned and fined $7,700 this week by a Malaysian court in the northern city of Ipoh for spreading offensive content online.

"We are certainly appealing and are disappointed by the decision," said Syahredzan Johan, Reza's lawyer, following the court's decision, the South China Morning post reported.

In June 2016, Reza wrote in a Twitter post, "Why did I paint the portrait of the Prime Minister as a clown? Because our country is being governed by fools and crooks. Malaysian politics is a circus full of clowns, the Prime Minister, Najib Razak, being the biggest clown of all, feeding us with bullshit and lies to distract us from knowing the truth about his corruption. The level of farce and absurdity that he used to cover-up the 1MDB financial scandal and corruption turned the whole country into a circus and a joke."

Reza also published a post on Facebook Tuesday, stating, "I have been found guilty for uploading a clown satire on Facebook. Punishment: One month imprisonment and a fine of RM30,000."

"We got yr back bro, we'll show them the fastest crowdsourced initiate ever!" Facebook user Sures Thambuthurai wrote on Reza's post.

Reza is not the first artist to be punished by the Malaysian government for his work. Political cartoonist Zulkiflee Anwar Ulhaque, who goes by Zunar, was arrested on sedition charges in 2016 for frequently ridiculing Razak and his wife in his artwork.