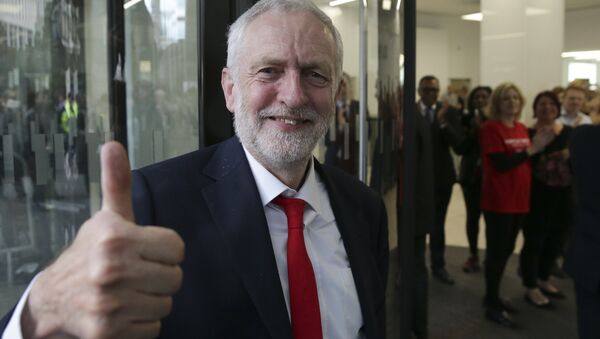 The Conservatives' smear campaign against its chief political rival comes in wake of the latest voting intention poll, which reveals the party's decreasing popularity.

Leader of Opposition and head of the UK Labour Party Jeremy Corbyn is facing numerous attacks from the Tories, who recalled their Cold War practices to discredit their left-wing opponent, branding him a communist spy.

The scandal was sparked by the allegations made by former Czechoslovak intelligence officer Jan Sarkocy, who claimed that Corbyn supplied sensitive information to the communist government.

The Anti-Corbyn Smear Campaign - the UK Tory Establishment Fear Him
The Conservatives were quick to jump on the bandwagon, calling on Corbyn to disclose a file that was opened on him by the East German intelligence agency, the Stasi, when he visited the German Democratic Republic (GDR) in 1980s.

For instance, British Prime Minister Theresa May has publicly called on Corbyn to be "accountable for his actions in the past".

"Where there are allegations of this sort, MPs should be prepared to be open and transparent," May said.

Tory Minister State for Security and Economic Crime Ben Wallace even alluded to Kim Philby, the ringleader of Cambridge Five, a group of Britons that spied for the Soviet Union during the Cold War, in his tweet about Corbyn.

Wallace was eventually forced to backtrack by Twitter users, who mocked the logic behind his attack.

Junior defense minister Tobias Ellwood, however, did not hold back, telling The Telegraph that the allegations raise "legitimate concerns" about Corbyn's "patriotism".

The Conservatives are keen on pushing the story and are planning to invite Sarkocy to testify before the House of Commons' Foreign Affairs Committee, which is chaired by a senior Tory MP, Tom Tugendhat.

Tugendhat stated that his committee is "planning to look at how nation states undermine democracy and the rule of law", invoking the tried-and-tested anti-Russian rhetoric to further undermine Corbyn.

"It is Russia and other countries as well that are trying to do it. While we are doing that it may be worth asking people who have actually tried to do this in the past to tell us how they did it," Tugendhat said.

The scandal comes just as the latest YouGov poll revealed a slight lead that the Labour Party holds over the Conservatives in voting preferences of British citizens.

The new figures show that 41% of Britons are likely to vote Labour, while the Conservatives enjoy the support of 40% of the UK electorate.

READ MORE: 'Once They've Got Leverage, They'll Use It': Profumo and Other Honey Traps

However, the scandal is likely to backfire and discredit the Tories themselves, as there is evidence that directly debunks the allegations.

According to the Sun, the Czechoslovak intelligence archives actually reveal that the communist spies never managed to successfully recruit Corbyn.

The Labour leader has confirmed that he indeed met with Sarkocy, who posed as a diplomat during his tenure in London, but staunchly denied supplying any information to the communist spy and dismissed the claims as "ridiculous smears."