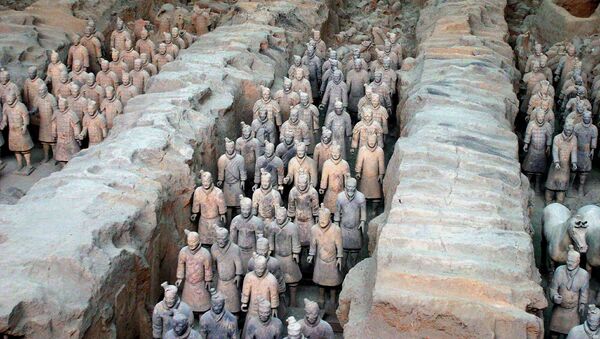 Twenty-four-year-old Michael Rohana was arrested for breaking off a statue's left thumb and stealing it after an "ugly sweater party" in December at the Franklin Institute in Pennsylvania, where 10 terracotta figures from the Terracotta Army are on display.

But First Let Me Take a Selfie: The Art of Self-Portraiture Gets Its Own Museum

An arrest affidavit filed by an FBI agent states that Rohana broke into a closed exhibit and took a selfie with the $4.5 million statue before pocketing the thumb.

When the museum finally noticed the disappearance of the thumb January 8, the FBI tracked down Rohana in his Delaware home after viewing surveillance video. The young man confessed to hiding the thumb in his desk drawer, the Japan Times reported.

"We call on the US side to severely punish the person who committed such a damaging act of vandalism and theft of humanity's cultural heritage," the director of the Shaanxi Provincial Cultural Relic Exchange Center told the Beijing Youth Daily Sunday.

According to court documents, Rohana was arrested for theft of museum work, concealment of major stolen artwork and the interstate transportation of a stolen object. However, he was released from prison on $15,000 bail.

The Terracotta Army is a collection of terracotta sculptures illustrating the armies of the first emperor of China, Qin Shi Huang. The purpose of the funerary art, built around 209 BC, was to protect the tomb of the emperor during his afterlife.

The army is a prominent tourist attraction in Xi'an, the capital of Shaanxi Province in central China, and has been a UNESCO world heritage site since 1987.

The theft caused a wave of criticism on Chinese social media.

"Whoever agreed to use our ancestor's funerary objects to curry favor with foreigners should be the one ‘severely punished' first," one user wrote on an unspecified social media platform, Japan Times reported.

"If they don't understand that our statue is precious why would we lend it to the US in the first place?" another user asked.

However, other users alluded to China's destruction of countless artifacts during the Cultural Revolution from 1966 until 1976. The goal of the sociopolitical movement, launched by communist leader Mao Zedong, was to get rid of capitalist and traditional elements from Chinese society in an effort to preserve communist ideology.

"Who will be held responsible for all the cultural relics destroyed in the Cultural Revolution?" a user wrote.