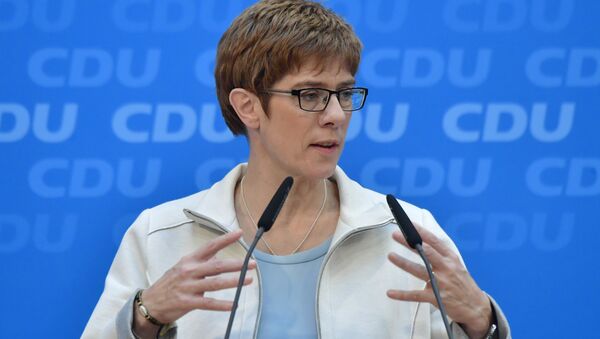 © AFP 2022 / John MACDOUGALL
Subscribe
Angela Merkel is speculated to pave the way for her ”crown princess;” and to secure her legacy as chancellor, she has nominated the head of the state of Saarland, Annegret Kramp-Karrenbauer, to be the CDU's next secretary general.

Angela Merkel has proposed her close ally Annegret Kramp-Karrenbauer, who has held the premiership in the tiny state of Saarland since 2011, to be the new general secretary of the Christian Democratic Union (CDU), according to inner party sources of the German media.

The key party post has become vacant since the former CDU Secretary General Peter Tauber announced he's leaving due to serious bowel illness. The final verdict is to be announced by a party congress in Berlin on February 26, which will also vote on the "loveless" coalition deal with the Social Democratic Party (SPD), which has caused criticism of Angela Merkel for giving up key ministries in the government to counterparts from the SPD.

Annegret Kramp-Karrenbauer, dubbed AKK by the media, is seen as the most probable candidate for the post, but also as Merkel's successor at the help of the CDU and eventually in the government. The German media interpreted the move as a clear signal from the incumbent chancellor, who also made the leap to the power from the position of party secretary general.  Here are some to know about Merkel's possible "crown princess."

Engaged in local CDU politics for more than three decades, Mrs. Kramp-Karrenbauer has made a name for herself as a successful regional politician in Germany's smallest state, Saarland. The woman, dubbed Merkel of Saarland by the media, has led two state coalition governments with the CDU and SPD as premier. Before that, she became Germany's first state interior minister in 2000.

Last year, ahead of September's federal parliamentary election, she secured a vital victory with 41% of votes in state polls; the vote was viewed as a test of the prevailing mood among Germans.  Amid a menacing SPD resurgence under Martin Schulz, her triumphant re-election didn't go unnoticed, as Merkel congratulated AKK, presenting her with a bouquet of flowers.

AKK was also praised by the CDU's previous Saarland premier, Peter Mueller, who said "There's not a task you can't trust Annegret with."

New to the Federal Scene

Despite an impressive regional profile, AKK is new to the national field. This can entail some difficulties for the newcomer, Süddeutsche Zeitung speculates; although she's been endorsed by Angela Merkel, who's rumored to have been  thinking of taking AKK to Berlin for more than 6 months. According to media, the proposed secretary general may face countercheck from the CDU's powerful parliamentary group, as Kramp-Karrenbauer isn't an MP.

A consistent Catholic and a mother of three, the Saarland politician is seen as an appeal to the more conservative members of the CDU, who have long hoped for change, the Frankfurter Allgemeine  Zeitung suggests. AKK has previously been subject to public controversy due to her position on same sex marriage.

Merkel: 'Isolationism Not the Right Answer to Global Problems' (VIDEO)
In 2015, she voiced her concerns that "if we open up [the definition of marriage] to become a long-term responsible partnership between two adults, then other demands can't be ruled out, such as a marriage between close relatives or between more than two people," which prompted fierce criticism from the SPD, Green Party and the German Left for comparing homosexuality with incest and polygamy.

A Fresh Face for the CDU

The former CDU Secretary General Peter Tauber, in his farewell statement, expressed hope that Union would become "younger, more female and more diverse," making it clear that his successor is going to be female. Voicing a stance of some circles within the party, he stated "There are not enough young people, far too few women, and not enough Germans with an immigration background who are involved in our ranks." AKK, who is an active supporter of female quotas, may be of some help.

Speaking to Bloomberg, Kramp-Karrenbauer described herself as a "book junkie" and an AC/DC fan. Born in Saarland on the border with France, AKK, who takes relations between two neighboring countries with a troubled past very seriously, speaks French and has said she continues to take lessons to improve her command of the language.