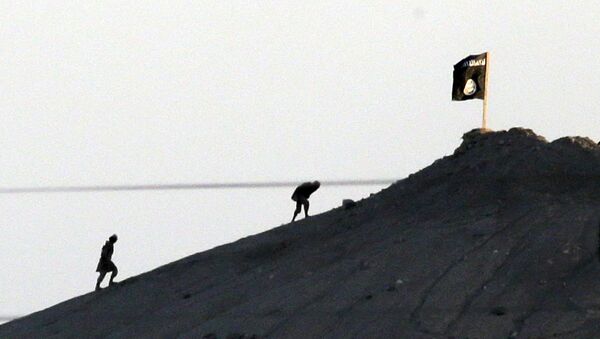 © AP Photo / Lefteris Pitarakis
Subscribe
International
India
Africa
Several hundred Daesh fighters are currently imprisoned in Syria, where the terrorist movement has gradually been subdued in recent years. A group of them are Danish and may be taken back for prosecution, despite that fact that the Danish Defense Minister would rather have them tried in the Middle East.

Following a US-led coalition meeting in Rome, during which US Defense Secretary, James Mattis urged the coalition partners to "provide relief" to the Syrian Democratic Forces (SDF), Danish Defense Minister Claus Hjort Frederiksen argued that his country might be forced to "take back" Danish jihadists for prosecution, Danish Radio reported.

By Frederiksen's own admission, the Danish authorities were currently trying to establish the concrete number of the captured jihadists and examine their cases. However, Frederiksen himself made no secret of the fact that he would prefer them to go on trial in the respective countries where their crimes were committed.

"They have beheaded people, raped women and children and sold people. For me, it is paradoxical for those militants to now claim Western norms regarding the protection of rights," Frederiksen told Danish Radio. "I think it's pathetic for those people to ask to be given safety in the Western countries that they so despicably wanted to defeat," he added.

The Bill Does not Add Up: Norway, Finland Lose Track of Jihadists
While stressing that the "foreign fighters" must be prosecuted where they have committed their crimes, Frederiksen also stressed that the US-backed SDF should not be left with the sole responsibility of dealing with the panful issue.

"We must not let down an ally by trying to leave everything at their door. We must therefore examine the cases specifically," Frederiksen said.

By contrast, the UK, a fellow coalition member, has previously refused to bring British jihadists "back home." Defense Minister Gavin Williamson stressed that they "turned their backs on Britain and everything it stands for," calling them "the worst of the worst."

Around 150 Danish citizens have joined militant extremist movements in Syria and Iraq since 2012, above all Daesh (ISIS/ISIL). An unknown fraction of them, whom Frederiksen described as a "little group," ended up incarcerated by the SDF.

Previously, Copenhagen had made it clear that "foreign fighters" are not welcome back in Denmark. Since March 2015, the Nordic nation's Immigration Service has been able to revoke the residence permits of the suspected jihadists who went to the Middle East from Denmark, but were not Danish citizens.