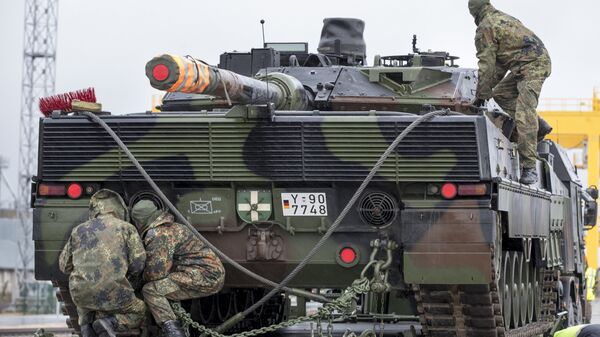 Commenting on Germany's plans to play a more active military role in NATO, German military expert Jurgen Rose told Sputnik that it may, in the end, damage the Bundeswehr's combat capabilities.

The beginning of 2019 should see the formation of NATO's Joint High-Readiness Joint Task Force in Eastern Europe, which has already been branded the alliance's spearhead.

German Defense Minister Ursula von der Leyen said that Berlin would play a decisive role in the creation of the new NATO task force, adding that the new NATO headquarters should also be built in Germany.

NATO's Hidden Agenda: What's Behind Drills With US Nuclear Weapons in Germany
In an interview with Sputnik Germany, German military expert Jurgen Rose said that Von der Leyen's remarks are out of sync with the realities of the Bundeswehr, where a shortage of combat-capable tanks has yet to be resolved.  He referred to a secret document by the German Defense Ministry which specifically cites just nine battle-ready Leopard 2 tanks out of the 44 which are currently in service with the German army.

According to Rose, the conclusion of a coalition agreement between German Chancellor Angela Merkel's CDU/CSU bloc and the Social Democrats should be followed by the government dealing with the issue of increasing the country's defense budget.

"It's all about billions in the budget which should be duly distributed. The Defense Ministry wants to provide the Bundeswehr with as much money as possible to improve the condition of the hardware and personnel. We have too much of the Bundeswehr for too little money," Rose noted.

He suggested that Germany creating a mechanism for fulfilling its obligations within the new Joint High-Readiness Joint Task Force will damage other German army units in terms of financing.

"This will respectively affect their combat readiness and the level of training," Rose emphasized.

He recalled that right now, there are only 300 tanks in the German army, which possessed more than 3,000 such armed vehicles after the end of the Cold War.

No Threat to Russia

In this vein, Rose suggested that the Bundeswehr would hardly pose any particular threat to Russia.

"Responsible officers in Russia can relax because they must know that the situation in the Bundeswehr is not as good as it seems and that are significant problems," he said.

Pentagon Chief Accuses Russia of Attempts to Undermine NATO's Capabilities
At the same time, he warned against underestimating the status quo of Germany, saying that "in the event of a possible new conflict, the Bundeswehr and NATO will very quickly be able to rectify it."

He described NATO's defense budget as "a huge economic factor of the defense industry for all those groups that make money on all this."

Ursula von der Leyen has, meanwhile, told Deutsche Welle that there would be "billions" for Germany's military budget, in a statement that was preceded  by her touting the Permanent Structured Cooperation (PESCO) pact clinched by EU members in December 2017.