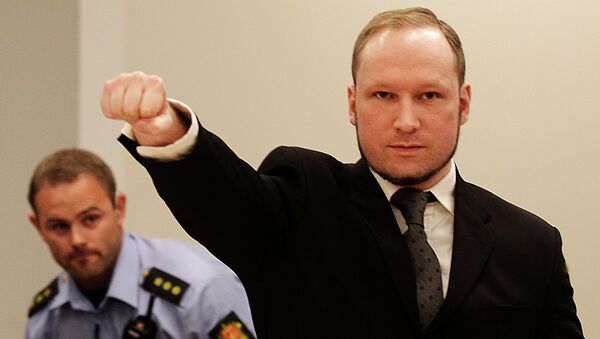 A "drug-free" Breivik claimed to have reached stage four in his self-developed de-radicalization program, "outstripping Nelson Mandela." He also voiced a desire to leave his militant beliefs and nationalist ideology behind, Verdens Gang reported.

Anders Behring Breivik, the most deadly mass murderer in Norway's history, claimed that he regretted the terrorist attacks he committed on July 22, 2011 and pleaded for help leaving his life of crime behind him, the Norwegian daily Verdens Gang wrote, citing his letter to Skien prison management.

In the letter, Breivik, whose dual attack against Oslo's government quarter and the Labor Youth Camp on Utøya Island left 77 people dead, wrote that he wanted to move on with his life. Additionally, the killer claimed his willingness to comply with what he called "prison requirements" and that he desired to leave the "fascist, national socialist and ethno-nationalist" ideology and movement. He made no conditions, Verdens Gang reported.

The letter was sent to the prison management last spring after Breivik had lost his lawsuit against the Norwegian state, in which he claimed that his human rights were violated.

"I regret having carried out the action on July 22, 2011, and if it were possible, I would see it undone," Breivik wrote, as quoted by the newspaper.

The Sadist Formerly Known as Breivik: Norway's Notorious Killer Changes Name
However, Breivik's desire to meet society halfway was met with skepticism, not least from medical circles. Psychiatrist Henning Værøy of Akershus University Hospital in Oslo had no belief in the authenticity of Breivik's remarks.

"There is no reason to trust his remorse. It seems obvious that Breivik is trying to manipulate, something that terrorists are doing to have their way. He is ill-thriving in jail and would rather go out," Værøy told Verdens Gang, suggesting that Breivik was "cheating" in order to be able to "repeat the same actions which had him convicted."

Breivik is currently serving a 21-year prison term, the maximum in Norway. However the term may be prolonged indefinitely, should the authorities find reason enough. So far, Breivik has spent his time in maximum confinement and has never had contact with other inmates.

According to Verdens Gang, psychiatrist Randi Rosenqvist, who has been compiling risk evaluations of Breivik since 2013, proposed to allow the 38-year old this privilege, but her proposal was put on ice after six weeks' evaluation. Rosenqvist then described Breivik as "friendly," but "completely devoid of empathy."

Rosenqvist also pointed out that Breivik was constantly changing attitudes, which made it all the more difficult to trust him. Among other things, she referred to the Nazi salute Breivik had made in court, later claiming he had converted to national socialism. Breivik himself later waved it away as a "PR-stunt."

​Furthermore, Breivik claimed he has developed his own de-radicalization program that involved seven steps. According to Rosenqvist, Breivik claimed had reached stage four, surpassing Nelson Mandela, who "never went further than stage three" as he never disavowed having led a guerilla organization.

According to Rosenqvist, Breivik himself claimed that back in 2006, he had only three prospects — job, study and terrorism. However, due to sleep problems which rendered the first two options unavailable, he "had to go for terrorism," in his own words.

Breivik admitted abusing nicotine since age 21. Later he switched to snus, moist powder tobacco to be placed under the upper lip — something he connected to his insomnia. Later he claimed having quit snus in March 2017, his illness thus "being over."