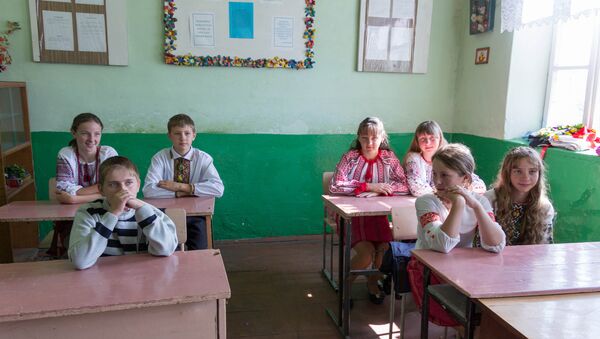 © Flickr / Brian Woychuk
Subscribe
Budapest calls on Kiev to suspend the implementation of the new education law and enter into a dialogue with Transcarpathian Hungarians on the issue, Hungarian Minister of Foreign Affairs and Trade Peter Szijjarto said Friday.

"Ukraine, which is aspiring to achieve European integration, has recently severely contravened the international laws on the protection of minorities, adherence to which is also strictly required by the European Union … Hungary calls on Ukraine to 'suspend the implementation of the Education Act instead of conducting an international campaign of lies' until it comes to an agreement with Transcarpathian Hungarians on all of the details," Szijjarto was quoted by the ministry as saying in a telephone statement to local media.

Commenting on the absence of transcarpathian Hungarians at the negotiations on the law on Wednesday, the minister cited the Ukrainian government’s intention to discuss a newly prepared piece of legislation based on the adopted act instead of holding substantive consultations on amending the law in line with the Venice Commission recommendations.

Last Words? Ukraine Bans Dozens of Russian Books
Szijjarto pointed out that the Ukrainian authorities had actually begun the implementation of the education law since they had informed schools of Hungarian minorities that world literature must be taught in Ukrainian starting September, the press release said.

The Ukrainian new education law stipulates staged abandoning of studies in minority languages and shifting to instructions exclusively in Ukrainian. In early December, the Council of Europe's advisory body on constitutional matters (Venice Commission) qualified that it was a legitimate aim for states to promote the strengthening of the state language and its command by all citizens however recommended consulting ethnic minorities and extending a transitional period for the law implementation. Earlier in the day, the Ukrainian government proposed a bill to extend the transitional period for additional three years.

Hungary, which has a big diaspora in Ukraine, has consistently expressed strong opposition to the legislation and made a number of steps aimed at hindering Ukraine's integration with NATO and the European Union in protest of violations of the minority rights in the country. The legislation has been also criticized by countries that have their respective ethnic minorities in Ukraine, including Russia, Moldova, and Romania.

Under the new Ukrainian legislation, starting from September 1, 2018, children from national minority groups will be able to study in their native language only at the primary school level, while secondary and post-secondary education will be only in Ukrainian. The full switch to Ukrainian-language education is set for September 1, 2020.

000000
Popular comments
You know a regime is morally bankrupt when it dictates what languages must and must not be used as a medium of education. They want not only to rewrite the past, but also to ensure that the future is culturally monolithic and amenable to full control.
Medvezhonok
17 February 2018, 01:57 GMT1
000000
Newsfeed
0
New firstOld first
loader
LIVE
Заголовок открываемого материала
Access to the chat has been blocked for violating the rules . You will be able to participate again through:∞. If you do not agree with the blocking, please use the feedback form
The discussion is closed. You can participate in the discussion within 24 hours after the publication of the article.
To participate in the discussion
log in or register
loader
Chats
Заголовок открываемого материала
Worldwide
InternationalEnglishEnglishMundoEspañolSpanish
Europe
DeutschlandDeutschGermanFranceFrançaisFrenchΕλλάδαΕλληνικάGreekItaliaItalianoItalianČeská republikaČeštinaCzechPolskaPolskiPolishСрбиjаСрпскиSerbianLatvijaLatviešuLatvianLietuvaLietuviųLithuanianMoldovaMoldoveneascăMoldavianБеларусьБеларускiBelarusian
Transcaucasia
ԱրմենիաՀայերենArmenianАҧсныАҧсышәалаAbkhazХуссар ИрыстонИронауОssetianსაქართველოქართულიGeorgianAzərbaycanАzərbaycancaAzerbaijani
Middle East
Sputnik عربيArabicArabicTürkiyeTürkçeTurkishSputnik ایرانPersianPersianSputnik افغانستانDariDari
Central Asia
ҚазақстанҚазақ тіліKazakhКыргызстанКыргызчаKyrgyzOʻzbekistonЎзбекчаUzbekТоҷикистонТоҷикӣTajik
East & Southeast Asia
Việt NamTiếng ViệtVietnamese日本日本語Japanese中国中文Chinese
South America
BrasilPortuguêsPortuguese
NewsfeedBreaking
08:45 GMTJapanese PM Kishida: Tokyo Eyeing Enemy Base Strike Capability Amid China and NK's Military Buildup
08:34 GMTBiden's Re-Election Bid: Should US Politicians & Justices of Advanced Age Undergo Cognitive Tests?
08:21 GMTAt Least One Killed in Northern Ireland as Storm Arwen Pounds Parts of UK
07:58 GMT'Dry Turkey' on 'Stolen Land': BLM Faces Twitter Backlash for Blasting Thanksgiving
07:25 GMT'End of an Era': Celebs Pay Tribute to Broadway Legend Stephen Sondheim
07:00 GMT'Thank God I Didn't Lose Any Teeth': Ovechkin Receives Stitches After Puck Blow to His Face
06:12 GMTNetizens in Grip of Guesswork After WHO Skips Two Greek Letters to Name New COVID Variant
05:55 GMTAustralia Halts Flights From 9 Southern African Countries Over Omicron Strain
05:24 GMTKanye West Says God Wants to Bring Him and Kim Together Again
05:10 GMTAs Indian Health Survey Suggests Women Outnumber Men Expert Claims 'This Isn't the Real Number'
04:50 GMTP&G Recalls Over a Dozen Old Spice, Secret Sprays After Detection of Cancer-Causing Chemical
03:47 GMTAlabama AG Threatens to Sue City Officials for Removing Confederate President's Name From Avenue
03:39 GMTOver 100 People Arrested in Solomon Islands After Riots in Honiara, Police Say
03:39 GMTMigrant Caravans in Mexico Head North After Slow Visa Processing by Authorities - Reports
03:34 GMTOutgoing UK Chief of Defense Staff Describes Russia as Most Acute Threat
02:59 GMTRussia, China Slam Idea of Summit For Democracy As It Contradicts Development of Modern World
02:30 GMTBoebert vs. 'Jihad Squad': GOP Rep. Buries the Hatchet With Squad's Omar Over Feud Caused by Remarks
01:53 GMT'As if Disney Were Entering Notre-Dame': Critics Blast Cathedral's 'Woke' Rebuilding Plan - Report
01:42 GMTMan Killed After Trying to Crash Gate of San Diego Military Base With Knife
01:07 GMTNew York Governor Declares State of Emergency Amid Spike in COVID-19 Infections