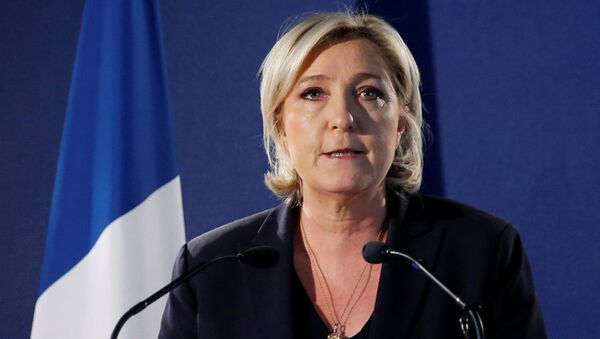 © REUTERS / Benoit Tessier
Subscribe
International
India
Africa
This month, France's Eurosceptic National Front (NF) leader Marine Le Pen announced plans to rename the party this spring. National Front French MEP Gilles Lebreton spoke to Sputnik about the difficulties the party hopes to overcome with a new name and the problems that it has to solve in the framework of its overall strategy in Europe.

Getting more voters is one of the reasons for the so-called "rebranding," Leberton believes.

“A different name will allow us to attract a new category of voters. Renaming will mean that we have finally broken away from Jean-Marie Le Pen, and many people will vote for us.” (Jean-Marie Le Pen, who founded the party, is Marine Le Pen's father)

At the same time, at the European level, the party will continue its traditional confrontation with the EU.

“NF's goal hasn't changed. We are against the EU and we want it to cease to exist. We want to create a different European organization in which the sovereignty of all member states would be respected. Marine Le Pen calls it the Union of European Nations,” Gilles Lebreton stressed.

Marine Le Pen announced that she will propose a new name for the party in March during an interview with 'Le Grand Rendez-vous', a TV program on the channel Europe 1, in order to transform the National Front into an opposition political party capable of gaining the necessary majority in the next presidential election.

Leader of French Right-Wing FN Party Le Pen Urges to 'Overthrow EU From Within'
This month, the appeals court in Versailles upheld his expulsion, ruling that he could retain the honorary role of party president for life. This position, though, might be eliminated at the party congress, which will be held in Lille on March 10-11. Despite being banned from participating in it, Mr. Le Pen has threatened to come to the congress with the help of a 'public force'.

It should also be noted that the recent high-profile National Front resignations include the departure of Vice-President Florian Philippot, for many years considered the right-hand man of Marine Le Pen. He left the party in late August, disagreeing with Marine Le Pen's decision not to put him in charge of the party's strategy and public relations.

The views expressed in this article by Gilles Lebreton are solely those of the speaker and do not necessarily reflect the position of Sputnik.