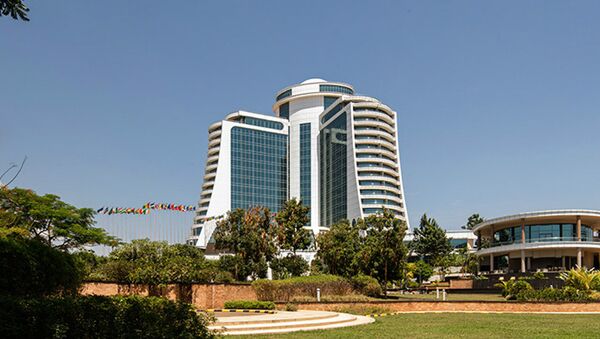 © Photo : Sovereign Hotels
Subscribe
While looking into the mysterious death of a Finnish businessman in a Ugandan hotel room, which involved forged documents and drugs, the investigative reporter who broke the story was reportedly abducted by local security forces.

The death of a 41-year Finnish arms dealer in a hotel room in Uganda's capital Kampala has triggered a hot debate in the Nordic nation. Apart from the murky circumstances surrounding his death, which is being investigated as a murder in Finland, it raised concerns about "unethical" arms exports, as the man acted on behalf of Finland's leading arms manufacturer, the daily newspaper Hufvudstadsbladet reported.

The man was later identified as an external consultant visiting Uganda to promote Finland's mostly state-owned defense company Patria, which prompted Economic Affairs Minister Mika Lintilä to request a detailed report from the company on its approach to ethics and demand that it change its routines.

According to police spokesman Luke Owoyesigyire, the Finnish man presented an invitation from the Supreme Chief of Uganda's Internal Security Service, Colonel Frank Bagyenda Kaka, which later proved to be fake.

Uganda Schools Well-to-Do Finland on Integration of Refugees
The man, who was said to have had meetings to market Patria's defense technology and even shared a car with former Communications Minister Suvi Lindén, was later found dead in the hotel Pearl of Africa. In the room, unspecified drugs were reportedly found by the police. However, the police have, as of yet, been unable to determine whether the death was caused by drugs or external violence.

Patria's leadership confirmed that the man had been granted permission to market Finnish weapons during his trip to Uganda and Mozambique, but regretted this as a mistake. Patria CEO Olli Isotalo also stressed that the man was not permanently employed by the company. Isotalo also emphasized that Finland didn't intend to sell arms to Uganda, as a security analysis is needed to initiate these proceedings. Uganda is included in Transparency International's list of countries that violate human rights and ranks as one of the world's most corrupt countries.

Lindén, a former MP and present-day UN special envoy, assured that the goal of her own visit was to promote information technology, and was thus completely unrelated to the defense concern Patria, national broadcaster Yle reported.

In a further plot twist, Charles Etukuri, a Ugandan journalist who in his coverage of the incident hinted that Ugandan security services might be involved in the Finn's death, was later reported abducted. According to Felix Osike of the newspaper New Vision, who claimed that Etukuri was "bundled away by men in military gear," the kidnapping was related to Etukuri's speculations. Ugandan National Security Minister Henry Tumukunde admitted that Etukuri "was no longer free," but denied the kidnapping part, Yle reported.

The deceased 41-year-old was reported to be a businessman, a father and a member of the National Coalition Party. The friends section of his Facebook page included dozens of celebrities as well as convicted criminals. He was also reported to be a Helsinki nightlife regular.

In recent years, Patria, which is 50.1 percent owned by the Finnish state and 49.9 percent by Norways Kongsberg Group, has faced a series of scandals involving fraud charges over arms sales in Slovenia, Croatia and Egypt.

In late 2017, the Norwegian daily newspaper Verdens Gang published footage of a Patria-manufactured armored personnel carrier being used in the Yemeni war. Patria later admitted to selling 40 personnel carriers to the United Arab Emirates, which is involved in the war against Houthi rebels.