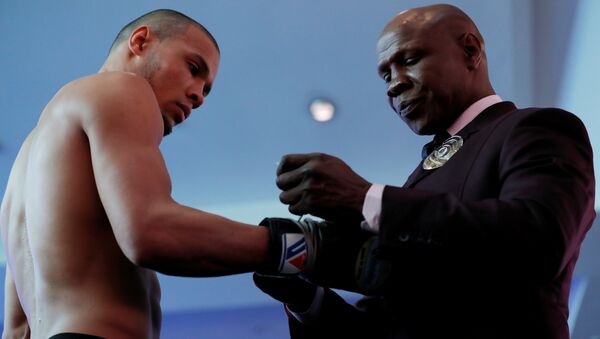 © REUTERS
Subscribe
International
India
Africa
Is sporting success nurture or nature? Some of the world's most famous sportsmen have had children who have tried to copy their achievements, with variable rates of success.

The pair are squaring up in the semi-final of the super middleweight World Boxing Super Series, with the winner set to face either Germany's Jurgen Braehmer or another English fighter, Callum Smith in the final of the tournament. Groves' WBA world title is also on the line.

Eubank's father Chris was a world middleweight boxing champion himself in the 1990s and his clashes with British rival Nigel Benn have gone down in ring history as some of the best domestic tear-ups.

Benn's own son, Conor, is also starting out as a boxer, and has racked up 11 wins, eight of them by knockout.

Floyd "Money" Mayweather junior, who beat Conor McGregor last year and then went back into retirement with an unblemished 50-0 record, is one fighter who definitely improved on his father's record.

Floyd senior was a talented boxer in the 1980s but he lost six fights and never even challenged for a world title, while Money's uncle Roger was a world featherweight champ in the 1980s but ended up losing 13 times.

But sporting sons do not always emulate their father's success.

Young Marvis, a heavyweight like his dad, won his first 10 fights but then got knocked out by Larry Holmes in 1983 and three years later he was unfortunate enough to meet "Iron" Mike Tyson in his prime. Marvis did not last 20 seconds and quit the ring two years later.

Football too can be a harsh business for a son.

Scotland international Kenny Dalglish was one of the greatest players ever to play for Celtic and Liverpool.

He scored 230 goals in 559 games and later carved out a successful career as a manager, leading the Merseyside team to the league title three times and repeating the trick with unfashionable Blackburn Rovers in 1995. Dalglish's children grew up living and breathing football.

His daughter Kelly is a successful sports broadcaster with the BBC and Sky but his son Paul was always going to struggle in the mighty shadow of his father.

Paul Dalglish made his league debut for Newcastle, then managed by his father, but was released in 1999 after his dad had got the sack.

He played for a number of lower league teams in England and Scotland before ending his career in the United States and turning to coaching.

In the Shadow of the Father

Football has spawned many sporting fathers and sons.

Sir Alex Ferguson, legendary manager of Manchester United, gave his son Darren his debut but the midfielder was released after 27 games and spent most of his career in the lower leagues. He is currently managing Peterborough, in the third tier of English football.

My trying2be protective of @StGeorgeGroves gets me negative feed back
Im not looking2be liked by pretending Watson & Blackwell didn’t happen.
There’s no disgrace in me reminding the refs2be mindfull as it’s genuine.
To look at @ChrisEubankJr he seems normal but he’s far from it.

Nigel Clough, another legendary manager who had also been an ace striker before his career was cut short by injury, begat Nigel, a talented midfielder with Nottingham Forest and Liverpool but a less successful manager, currently with tiny Burton Albion.

The great Dutch player Johan Cruyff had a son, Jordi, who while talented was never in the same class as his illustrious father.

Other sports have also had their dynasties.

secret filming in Barcelona. can’t wait to show you what I’m working on!! ✌🏼 pic.twitter.com/vX4fOSKqEc

Cricketer Chris Broad played 26 Test matches for England and countless county matches and his son Stuart has been a mainstay of the England bowling attack for years, although there have been calls for him to go after a disappointing Ashes series in Australia.