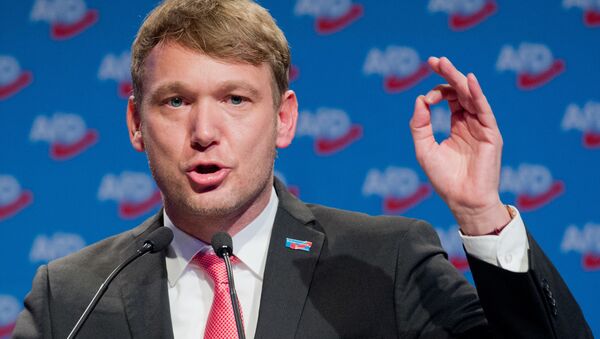 The third-largest party in the German parliament after the Christian Democratic Union and the Christian Social Union, Alternative for Germany, has repeatedly hit the headlines with its anti-immigration messages.

Andre Poggenburg, head of the Alternative for Germany (AfD) party in the state of Saxony-Anhalt, is accused of inciting racial hatred with respect to the Turkish community in his country, according to Deutsche Welle.

Speaking at an Ash Wednesday get-together, Poggenburg specifically referred to the 1915 massacre of the Armenian population in Ottoman Turkey.

"These caraway traders have the genocide of 1.5 million Armenians weighing them down… and they want to tell us something about history and homeland? They're nuts. These camel drivers should go off to where they belong: far, far beyond the Bosphorus to their mud huts and multiple wives," he said.

Poggenburg also lambasted dual national German-Turkish citizens, describing them as "fatherland-less riffraff" who had no "homeland."

His remarks came after the German-Turkish community's opposition to the name of a new Homeland ("Heimat") Ministry, which was supported by the AfD, the German parliament's largest party after the Christian Democratic Union (CDU) and the Christian Social Union (CSU).

The formation of the ministry is part a coalition deal between Chancellor Angela Merkel's CDU/CSU bloc and the Social Democrats, which was clinched on February 7.

Poggenburg, for his part, insisted that he was "a bit inebriated, but still in control of myself" when talking "pointed political satire" during the Ash Wednesday, the first day of the Christian fasting season of Lent, which traditionally sees German politicians sipping beer and taking swipes at each other.

The AfD has more than once grabbed the headlines over its opposition to migrants and refugees in Germany, which is currently home to about three million people of Turkish origin.