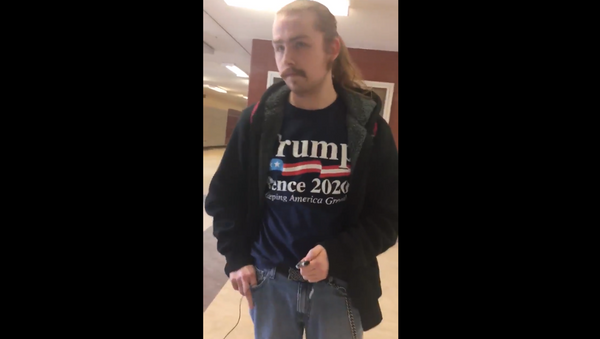 © Screenshot/Detroit Metro Times
Subscribe
International
India
Africa
On Wednesday, the president of Detroit's Wayne State University announced that Corbin Steele, a student at the school, was suspended pending an investigation after officials were notified of his Tuesday run-in with campus activists.

"Last night we became aware of an incident in which a Wayne State student and a number of individuals staffing a table in State Hall engaged in a dispute," M. Roy Wilson, the school's president, said in a statement. "The individual in question has since been detained and is suspended from the university pending a full investigation."

"While we encourage respectful dialogue and sometimes passionate debate about differing views and perspectives, there is no place for violence or threats of violence at Wayne State," Wilson added.

The "threats of violence" that Wilson is referring to is the knife that Steele pulled on members of social rights group By Any Means Necessary (BAMN), who had just set up their station on campus and were beginning to pass out literature. (The group is not associated with the Sputnik Radio program of the same name.)

​Video captured by Kate Stenvig, a BAMN member who is not enrolled at the school, shows Steele approaching the organizers and beginning to preach his beliefs on how immigration matters should be handled in the US.

"I think we should deport and kill all illegals that don't belong in our country," Steele is heard saying moments after brandishing his knife. After one of the BAMN members asks, "So you're a Nazi?" he clarifies that he is "not a Nazi."

The argument between the organizers and Steele quickly intensifies and ultimately ends when the activists tell him to go away.

But this was not the first time the college student had gotten in the faces of BAMN organizers. Speaking with The Detroit Free Press, Stenvig indicated that in the week prior he'd shouted US President Donald Trump's "Make America Great Again" slogan and "kill all illegals" when passing by their table.

However, Steele had not previously threatened violence to BAMN members.

Though the investigation is still ongoing, Wayne State University Police Chief Anthony Holt told the outlet he is unsure whether or not Steele threatened the campus activists.

"I don't know if he threatened them, but he violated campus policy on workplace violence," Holt said. "We don't allow any weapons or any type of violence between parties."

In response to the altercation, Stenvig noted that BAMN will be holding a march on campus.