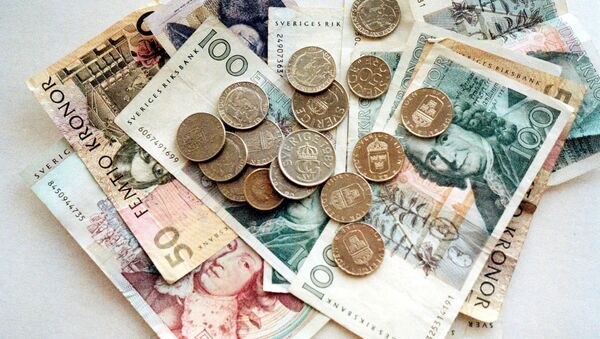 © AP Photo / Sven-Erik Johansson
Subscribe
A man who was seized with millions in cash after asking for money for a ticket has puzzled the Nordic nation and inadvertently unleashed a discussion on journalist ethics.

A man who was arrested for aggressive behavior while begging for a bus ticket in the Swedish city of Uppsala had SEK 6 million in cash ($750,000) on him, among other things, stuffed in his jacket as banknotes, the newspaper Uppsala Nya Tidning reported.

According to the police's account of the incident, the man was literally flinging his money about, as banknotes were flying around during his arrest.

Subsequently, the man was apprehended for suspicions of money laundering, police spokeswoman Lisa Sannervik reported. According to her, the police had good grounds to do so, as this type of sum clearly isn't "walking-around money" for a person begging for a ticket. Prosecutor Anne Sjöblom told the Nyheter Idag news outlet, that the man was likely to keep his fortune, unless the authorities succeed in proving that it was ill-gained.

Indian Police Uncover ‘Filthy Rich Beggars’ During City Clean Up Drive
Afterwards, the baffling news made national headlines, leaving many Swedes to question the profitability of begging. Uppsala Nya Tidning came up with a correction, stressing that the man isn't known for being a vocational beggar.

Furthermore, the newspaper stressed that the man was of "Swedish, or at least Nordic origin," as the Swedish word for "beggar" has in recent years evolved to denote an EU migrant of Roma descent, as they tend to be overrepresented among vagrants roaming Swedish streets.

According to the Uppsala24 news portal, the police's interpretation of the word "beggar" was far from what it usually means in everyday speech. Stressing this fact was, according to the news portal, "vital" for curbing the spread of "racist" sentiments.

"Begging has practically developed into an occupation in Sweden, not least in Uppsala, and the percentage of beggars has increased considerably throughout the country in recent years," Petterson told the trade newspaper for journalists, Resumé, which was also critical of UNT's language use.

According to Swedish law, the penalty for money laundering is imprisonment for up to six years,depending on the severity of the crime.

000000
Popular comments
According to latest news the man indeed is a gypsie from Romania and the "4,500 beggars" (gypsies) is not correct either (it's politically correct though) one need to at least double if not triple that figure and in summertime they are even more.