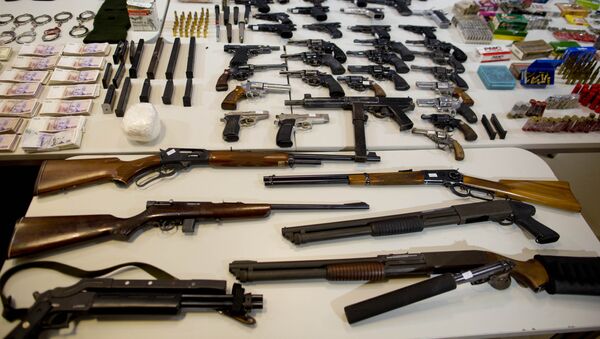 © AP Photo / Natacha Pisarenko
Subscribe
The flow of illegal weapons "of unseen scope" is poised to render useless the ongoing "arms amnesty," the fourth of its kind in only two decades, which was a bid to check the avalanche-like rise in deadly shootings, Swedish customs officials argued.

Record numbers of arms are seeping through Sweden's borders while the authorities' ability to confront this affliction is waning, national broadcaster SVT reported, citing the country's customs officials.

"It is an influx we have never seen before," Johan Lindgren, the chairman of TULL-KUST, a trade union for civil servants employed by the Customs and Coast Guard, told SVT.

According to Lindgren, the gaps are just too many for the problem to be handled with existing resources.

"We have become fewer, but the influx of weapons, alcohol and drugs has increased. We simply cannot be everywhere we should," Lindgren explained.

Paradise Lost? Deadly Shootings Up Five-Fold in Twelve Years in Sweden
Lindgren stressed the fact that the Coast Guard has lost around a third of its personnel since 2007, citing the need for an additional SEK 543 million ($68 million) to avoid further layoffs. As of today, customs stations in many places are completely unmanned at times. During weekends, the crews engaged in border protection are also severely limited.

"Surely, criminal gangs can put this jigsaw puzzle together. In Skåne [County] alone, there are several ports and inlets, and we cannot be everywhere at the same time," Lindgren said.

Unless the influx of arms is plugged one way or another, the ongoing arms amnesty may become a belly flop, the Swedish Customs Union warned.

"Regardless of how efficient we are with the scarce we have, [the illegal arms market] will be constantly replenished if we don't get rid of the gaps," Lindgren told SVT.

According to Lindgren, existing routines to offset the dwindling staff are insufficient.

"Our staff see colleagues retire after a long working life without being replaced," Lindgren said, citing the dire need for fresh blood.

On February 1, Sweden launched its fourth "arms amnesty" in the past two decades, this time aimed at putting an end to the equally unparalleled rise in deadly shootings and gangland violence. During the three-month amnesty, individuals can turn in arms without risking punishment. During the first week alone, a harvest of close to 800 pieces was reaped, Swedish Radio reported.

The number of criminal shootings is constantly increasing in Sweden. In 2017 alone, 42 people were killed and 140 injured in a total of 320 shootouts, SVT reported. This amounts to a five-fold increase in only twelve years.