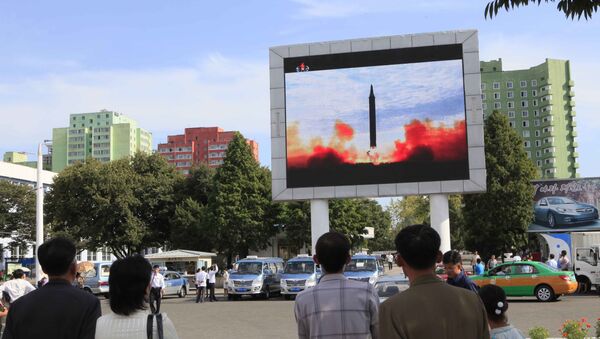 MOSCOW (Sputnik) - South Korean Ambassador to Russia Woo Yoon-keun on Thursday elaborated on the possibility of dialogue between the US and the DPRK as well as deployment of the US missile defense system in South Korea.

South Korea sees a possibility for a dialogue between the United States and North Korea, the US Congress members want to establish such a dialogue, Woo Yoon-keun said Thursday.

Woo added that Washington and Tokyo saw the latest changes of North Korea's position as the result of sanctions.

North Korea Uses US’ ‘Weak, Chaotic Foreign Policy’ to Advance Agenda - Expert
The situation on the Korean Peninsula has become tense after the United States and North Korea traded threats and insults following Pyongyang’s nuclear and ballistic missile tests during the past year.

Deployment of any new components of US missile defense system in South Korea, apart from the Terminal High Altitude Area Defense (THAAD) components already placed there, is not planned at the moment, the ambassador said.

"As far as I know, there are no plans for the deployment of [new] components," the ambassador told reporters.

Woo added that "all plans for the deployment of US missile defense system were aimed at the defense against North Korea, it does not concern Russia."

'Ivanka Trump of North Korea' Captivates World's Media at Winter Olympics
In early September, South Korea deployed the final units of the THAAD missile defense system, which Seoul and Washington consider to be an important military deterrence measure against a potential nuclear strike from North Korea. The THAAD system is supposedly designed to intercept short and intermediate range ballistic missiles in their terminal phase.

The move triggered sharp criticism from Russia and China, while Japan approved the steps, noting that they would help to promote peace and stability in the region.

The visit of South Korean President to North Korea is possible if Pyongyang changes its position, Woo Yoon-keun pointed out.

"It [the visit] depends on the behavior of North Korea. If North Korea will show its position differently and change its position, then it is possible," the ambassador told reporters.

According to Woo, it would be necessary to hold military consultations before Seoul and Pyongyang's top-level negotiations.

'A Message to Washington': The Rationale Behind N Korea's Military Parade
The ambassador added that South Korea had already proposed to Pyongyang to hold the military consultations.

In January, after a four-party meeting between North, South Korea, the International Olympic Committee and organizing committee of the 2018 Olympics in Lausanne, the IOC declared that the unified Olympic team of the two Korean states will take part in women's ice hockey under a "unification flag", while athletes from North Korea will compete in figure skating, short track and skiing.