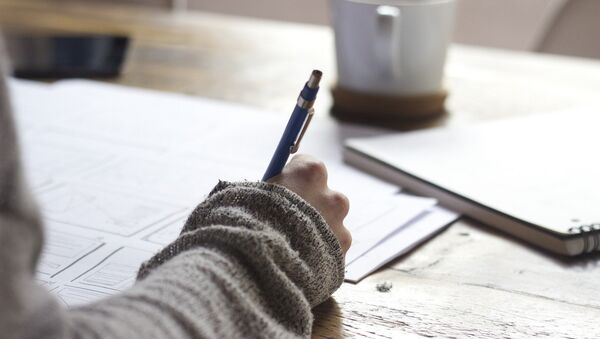 CC0 / /
Subscribe
Israeli scientists claim they have mastered a new and more profound way of reading people’s emotions – when appearances or words lie, handwriting can still reveal the truth.

The University of Haifa has presented a computerized system that can identify people’s moods by detecting changes in their handwriting. The system uses the findings of Prof. Sarah Rosenblum, who has already made it possible to diagnose early stages of Parkinson’s disease this way.

The system measures the slightest changes, such as the space between the letters, their height, and the amount of pressure. Such secondary automatic actions are hard to control for a human brain under cognitive pressure, which being in a bad mood and under stress can provoke.

To test the method researchers split 62 participants into three groups, setting a different mood – positive, negative and neutral – with a special movie. After that, they were asked to write a paragraph on a system that included all Hebrew letters, which turned out to be different depending on the emotions in each group.  For instance, people in a negative mood wrote quicker, with narrower and lower letters than more cheerful participants.

Finnish Schools to Remove Cursive Handwriting Classes From Curriculum
The researchers claim this method is easier to conduct than physiological tests, which can be complex and expensive as well as disrupt a person’s daily routine. Handwriting analysis can be more accurate than conventional techniques for evaluating people’s emotions, such as analysis of an external observer or self-reporting, as patients can lie or be unaware of their feelings.

As researcher Clara Rispler told the Jerusalem Post: "There’s a problem measuring emotions using objective indexes that are completely free of what the subject tells us. An ability to identify the subject’s emotions easily and non-invasively could lead to breakthroughs in research and in emotional therapy."

000000
Popular comments
cultural backgrounds of the subjects? What language(s) was (were) being used? What of the illiterate? How would this apply to chinese or japanese and other similar characters? The questions could go on but at the end of the day any research that attempts to claim that a method has been identified to state what psychological state any person is experiencing is doomed to failure due to the diversities and complexity of the human animal on this planet.
michael
18 February 2018, 04:18 GMT
000000
Newsfeed
0
New firstOld first
loader
LIVE
Заголовок открываемого материала
Access to the chat has been blocked for violating the rules . You will be able to participate again through:∞. If you do not agree with the blocking, please use the feedback form
The discussion is closed. You can participate in the discussion within 24 hours after the publication of the article.
To participate in the discussion
log in or register
loader
Chats
Заголовок открываемого материала
Worldwide
InternationalEnglishEnglishMundoEspañolSpanish
Europe
DeutschlandDeutschGermanFranceFrançaisFrenchΕλλάδαΕλληνικάGreekItaliaItalianoItalianČeská republikaČeštinaCzechPolskaPolskiPolishСрбиjаСрпскиSerbianLatvijaLatviešuLatvianLietuvaLietuviųLithuanianMoldovaMoldoveneascăMoldavianБеларусьБеларускiBelarusian
Transcaucasia
ԱրմենիաՀայերենArmenianАҧсныАҧсышәалаAbkhazХуссар ИрыстонИронауОssetianსაქართველოქართულიGeorgianAzərbaycanАzərbaycancaAzerbaijani
Middle East
Sputnik عربيArabicArabicTürkiyeTürkçeTurkishSputnik ایرانPersianPersianSputnik افغانستانDariDari
Central Asia
ҚазақстанҚазақ тіліKazakhКыргызстанКыргызчаKyrgyzOʻzbekistonЎзбекчаUzbekТоҷикистонТоҷикӣTajik
East & Southeast Asia
Việt NamTiếng ViệtVietnamese日本日本語Japanese中国中文Chinese
South America
BrasilPortuguêsPortuguese
NewsfeedBreaking
14:00 GMTJapanese Space Tourists Arrive at ISS
13:51 GMTElon Musk Reveals 'One of the Biggest Risks to Civilisation'
13:49 GMTPutin: Russia Supports Viable Settlement of Cyprus Dispute Within Framework of International Law
13:46 GMTAOC Slams Boebert Family Christmas Pic Showing All Four Kids Brandishing Rifles
13:39 GMTUK Joins US in Diplomatic Boycott of 2022 Beijing Winter Olympics
13:22 GMTUK Tory Hosted ‘Reckless’ Xmas Bash as Downing Street COVID-Breaching Party Scandal Gathers Steam
13:20 GMTUS Will Unveil Investments to Back Independent Media Across World at Summit for Democracy
13:19 GMTElon Musk Teases Looming Human Trial Of Neuralink's Brain Chip Pending FDA Approval
12:49 GMTChina Warns Canada of Investment Exodus if It Believes Huawei Risks 'Invented' by US
12:48 GMTLondon Airbnb Owner Told Swedish Renter 'I Hope You Didn't Do It' After Christmas Eve Murder
12:43 GMTRussian Fighters Scrambled to Escort French Rafale, Mirage Jets Over Black Sea
12:07 GMTBoris Johnson 'Sickened' by Leaked Video of No 10 Staff Joking About Lockdown Christmas Party
12:04 GMTRussia's Navalny Files 5th Lawsuit Against Prison in Pokrov
11:58 GMTBaltics to Completely Disconnect From Russian Power Grid by 2025, Lithuanian Energy Minister Says
11:46 GMTSaudi Man Wrongly Detained in France in Connection With Khashoggi Murder Released
11:29 GMTFootball Greats Hail Mohamed Salah as Liverpool Striker Hits 34-Year Goal-Scoring Record
11:24 GMTSocial Media Uproar After Women 'Stripped & Assaulted' in Pakistani Market – Video
11:15 GMTUK to Turn Off 2G, 3G Mobile Phone Networks by 2033
11:11 GMTIndian Netizens 'Jealous' as UAE Announces 4.5-Day Work Week
11:00 GMTTiming of Next Putin-Biden Contact Not Yet Determined, Kremlin Says