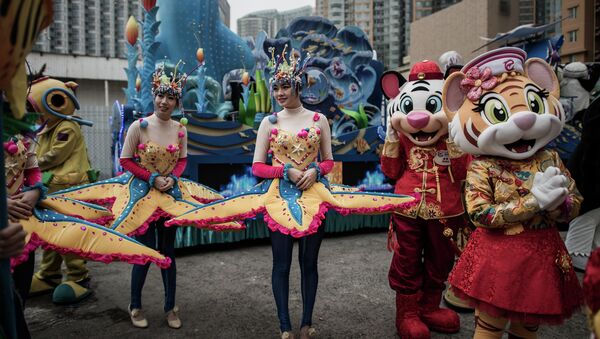 To celebrate the Year of the Dog, leading luxury brands have learned some new tricks to skim the cream off the alluring Chinese market. Warning! You are going to be exposed to lots of pups and lots of red!

Despite the recent slump, China is still the largest luxury goods market in the world, and the biggest brands are putting on something special for this Lunar New Year, celebrated on February, 16, in an attempt to get a piece of the holiday shopping spree.

The world’s biggest luxury brands have launched special marketing campaigns and collections for the occasion, starring the symbol of the 2018 Year – dogs of different kinds.

Pups are everywhere, outshining the traditional bird on sweaters, bags and T-shirts in a new Chinese line from Giorgio Armani. Louis Vuitton, who have also gone all in on puppy designs, has deployed the cutest dog on Earth – an animated shibe, who appeared in promos, became an emoji for the Chinese messenger WeChat and was put on some accessories. Prada used a robo-dog in their ad campaign on WeChat. Gucci has chosen Boston terriers, as two of them Orso and Bosco happen to belong to the creative director of the Italian brand. They have appeared on 1,000-dollar-bags, wallets and shoes, while pugs and corgis are used as animated emojis.

​All of them also chose all shades of red, which traditionally symbolizes happiness and joy in China, as the main color for the Lunar New Year marketing. This scheme was also adopted in the capsule collection of accessories by Fendi, who somehow managed to resist dogs. But the company exploited other NY traditions in China: presenting a short cartoon containing the “happiness” hieroglyph, traditional hongbao (envelopes stuffed with money given as presents) and the Beijing opera to appeal more to  Chinese shoppers.

Introducing the Year of the Dog #Prada Dachshunds, at the #PradaSpirit Café. ⠀ Visit a pop-up in Shanghai, Beijing, Macau, Hong Kong, Singapore, Taipei, Seoul, Vancouver or Costa Mesa for a #ChineseNewYear treat. ⠀ Discover more via link in bio. ⠀ #CNY2018