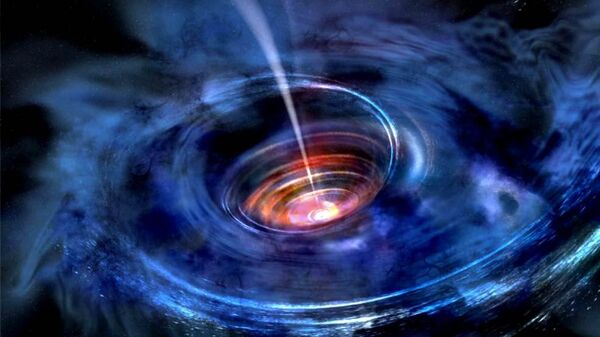 © NASA . Swift/Aurore Simonnet, Sonoma State University
Subscribe
International
India
Africa
Having made use of the world's most advanced ground based telescope, scientists managed to examine the heart of the spiral galaxy M77 and found it was entirely made of gas. The discovery is hoped to shed at least some light on how galaxies actually are built over time.

The world’s largest gas doughnut is around 47 million light years away, which is equal to 235 trillion miles, according to a study published in the Astrophysical Journal Letters.

Dr. Masatoshi Imanishi from the National Astronomical Observatory of Japan and co-authors utilized ALMA’s [the largest ground telescope located deep in the Chilean desert] highest possible resolution to peer into the center of Messier 77 and study its texture.

They found that the galaxy’s central part is a so-called active  galactic nucleus (AGN), which means matter is intensely falling toward the gigantic black hole and emitting powerful light rays, which is clearly seen in the pictures.

Dr. Imanishi and colleagues sketched the area around the enormous black hole in Messier 77 and schematically imaged a compact gaseous structure with a radius of 20 light-years. They found that the compact structure is rotating around the black hole, as expected.

Red Planet Calling: This is When Humans Are Expected to Leave Footprint on Mars

Interestingly, the distribution of spinning gas around the supermassive torus is much more complicated than earlier models suggested. In fact, it turned out to be more dense than expected.

The existence of these gas clouds has been predicted for decades, but this is the closest look astronomers have been able to take, thanks to the costly high-resolution ALMA equipment, which has been operating since March 2013.

The torus seems to have an asymmetry and the rotation is not just following the gravity of the black hole but also contains highly random motion. The find has led scientists to believe that there could have been a merger with a smaller galaxy a long time ago.