Roses Are Red, Violets Are Blue, All Six of These Valentine's Day Facts Are True 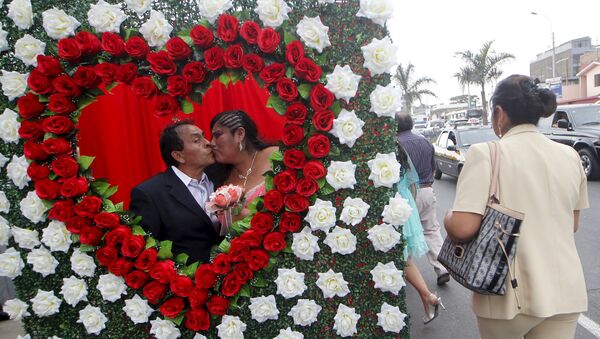 Valentine's Day is celebrated around the world on February 14 but where does the tradition come from and why has it been so successful? Sputnik looks at the day that love comes to town.

Millions of couples around the world will be sending each other gifts to celebrate their love on Wednesday, February 14, while many single men and women will receive cards from secret admirers.

The tradition has become a huge money-spinner for card companies, florists, chocolatiers and restaurants around the world.

1. The Origins of Valentine's Day Are in Rome

The ancient Romans celebrated a festival of love between February 13 and 15, which was known as Lupercalia.

A goat and a dog would be sacrificed by a man who would then whip the object of his affections with the severed tail of said animals.

💭 Her: "He's definitely thinking about another girl." 😠

💭 Him: "How am I going to explain that I'm watching Champions League on Valentine's Day." 🤦‍♂️ pic.twitter.com/wF8k9FKLbM

The festival, which was an excuse for widespread drunkenness and debauchery, included a lottery in which men drew the names of women from a jar and "coupling" ensued.

Some time in the third century AD one or possibly two Christians called Valentine, who refused to surrender their faith in pagan Rome, were executed on February 14.

The Roman Catholic Church would later make this Saint Valentine's Day, although it was removed from the liturgical calendar in 1969.

2. World's Most Romantic Man Was a French Prisoner of War

The title for the world's romantic man arguably goes to Charles, Duke of Orleans, who was captured by the English after the Battle of Agincourt in 1415.

While imprisoned in the Tower of London Charles, 21, sent the first Valentine's Day card to his young wife, Bonne of Armagnac.

In it was a poem which began: "I am already sick of love, my very gentle Valentine."

last Valentine’s Day my heart was shattered by a man who gave me Ernest Hemingway novels in an attempt to be romantic and this Valentine’s Day I’m going on a date with one of the smartest and most well spoken men I’ve ever met. Moral of the story = don’t settle for corny bitches

The poem, Farewell to Love, was aptly titled because for the next 25 years Charles was kept in captivity in a variety of English castles and by the time he was released Bonne, although only in her 30s, had died.

Bonne was the second of Charles' wives. Before his capture at Agincourt he had been married to Isabella of Valois, who had been widowed by England's King Richard II.

Isabella married Charles when she was 17 and he was only 12 and three years later she died giving birth to his child.

After his release from captivity in 1440 Charles — never one to give up on love — married Marie of Cleves, who was 32 years his junior, and they had three children.

US Customs agents have threatened to prevent banned flowers like chrysanthemums being brought over the Mexican border as Valentine's Day gifts.

US Customs and Border Protection announced this week agriculture specialists would be stationed at El Paso to inspect flowers and plants being brought over the frontier by men hoping to surprise their sweethearts.

as valentine’s day approaches i’ll never forget the most romantic thing a man has ever done for me……text me back.

Cut flowers are allowed into the US but some bouquets made in Mexico might use plants which are prohibited north of the border, such as chrysanthemums and choysia, which sometimes contain harmful pests and disease.

The US will also not allow live plants, seeds or bulbs into the country without special permits and phytosanitary certificates.

4. Valentine's Day is Banned in Pakistan

St Valentine was originally a Roman Catholic saint but the tradition spread throughout Protestant countries and in the 20th century it also became popular in Buddhist, Hindu and some Muslim countries.

But the tradition of sending flowers, gifts and secret messages to the object of one's affection is distinctly frowned upon in a number of countries, including Pakistan.

On Wednesday, February 8, the Pakistan Electronic Media Regulatory Authority warned television and radio stations against any promotion of Valentine's Day.

From my hero… a word on Valentines Day. pic.twitter.com/pKKtbPCu94

​"No event shall be held at the official level or at any public place," Pemra said.

The ban was introduced by the High Court in Islamabad last year after a petition by a group who said it was a cultural import from the West and "against the teachings of Islam."

Six out of 10 Pakistanis are under the age of 30 and many had embraced Valentine's Day and the sending of gifts.

Valentine's Day is also frowned upon in Saudi Arabia and parts of Indonesia and Malaysia.

5. A Haircut Saved a Man From The Valentine's Day Massacre

February 14 is a day of love and romance for most people.

But in 1929 there was little love lost in Chicago, where a full-blown gang war was under way between the infamous Al Capone and his enemies in the North Side Gang, led by George "Bugs" Moran.

On the morning of February 14 four men dressed as police officers turned up at Moran's headquarters, lined up seven of his henchmen and gunned them down in cold blood.

Moran was only saved because he had nipped out to the barbers and when he saw what he thought was a police car outside his headquarters he made himself scarce.

One of the victims survived for a few hours but refused to name the killers. Nobody has ever been brought to justice for the massacre, which was rapidly given its name by journalists in the Windy City.

Moran survived but would never challenge Capone again. He died penniless in prison in 1957.

6. In Future Valentine's Day Gifts Could be Healthy Chocolate

But health-conscious 21st century women — and indeed men — have become increasingly guilt-ridden at the thought of tucking into all those calories.

Now help is at hand.

Instead of buying his girlfriend tickets to see the @ChiliPeppers, a man bought tickets for the @chillipipers — "the most famous bagpipe band on the planet." https://t.co/pvxW8dMuJH

Several chocolate companies have added probiotics in a bid to assuage the guilt.

Ohso chocolate contains a billion live Lactobacillus and Bifidobacterium bacteria, as well as vitamins B, D and E, and the manufacturers say it is even better for you than probiotic yoghurt.

No doubt it won't be long before they will be making chocolate which actually makes you slimmer…although whether it tastes any good is another matter.