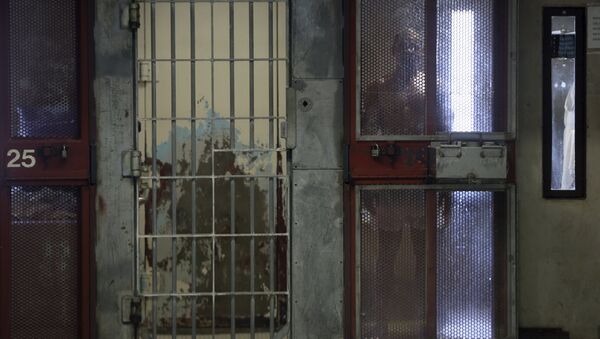 Drinkman was accused of an alleged role in a worldwide hacking and data breach scheme that resulted in more than $300 million in losses to people and businesses in the United States. However, the defense for Russian national has not decided whether they will appeal the court sentence, Drinkman’s Attorney Michael Riley told reporters.

"At this point we are unsure," Riley said on Wednesday. "He’s got 14 days. So, we have some time to review with him."

Earlier on in the day, US Judge Jerome Simandle said in court that he was prepared to accept $312 million in damages as form of compensation for victims in alleged Russian hacker's case.

Grand Theft Hack: Russian Geek Faces Decades in Jail Over Historic Data Theft
"I am prepared to [accept damages to the extent of] $311,700,000 to six of the victims," Simandle said. US Judge also added that the move would be taken into account during sentencing.

Drinkman wore a green prison jumpsuit. He was brought into the courtroom in handcuffs on a waist chain, carrying a large folder. Drinkman's wife was present in the room.After initial statements, Simandle continued the hearing behind closed doors, citing the need for confidentiality due to the "very sensitive sentencing material."

According to US prosecutors, Drinkman will be deported to Russia after serving his sentence.

Meanwhil, another Russian national Dmitriy Smilianets, co-conspirator of Vladimir Drinkman was sentenced to 51 months and 21 days in prison for cybercrimes and was freed in court after he already served them in custody. Smilianets and his attorney Igor Litvak told Sputnik they agreed with the federal court’s ruling and would not appeal it.

"A fair trial, everything fair," Smilianets said, adding he was not sure if he would stay in the United States.

Science & Tech
Hacker Hunters: Meet the Russian Nightmare for Cybercriminals
He was also accused of taking part in a hacking scheme in the United States and beyond that had compromised millions of credit card numbers and resulted in over $300 million in losses.

Judge Jerome Simandle said restitution should be ruled on separately in approximately 60 days.

Smilianets and Vladimir Drinkman, were arrested while traveling in the Netherlands in June 2012. They were extradited respectively in September 2012 and in February 2015.

Both men pleaded guilty to having roles in the hacking ring in 2015, described by the US Department of Justice as the largest known data breach conspiracy ever prosecuted in the country.