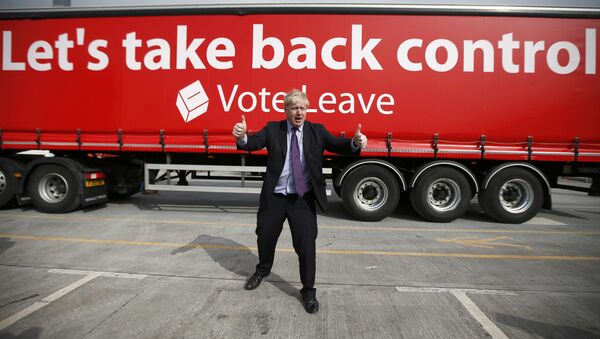 LONDON (Sputnik) – The UK authorities will not allow a "disastrous mistake" of halting the United Kingdom’s withdrawal from the European Union, UK Foreign Minister Boris Johnson stated in a major speech on Brexit on Wednesday.

As Johnson explained, Britain may choose to remain aligned with European Union standards for some products to help trade after Brexit, adding that Britain could strike a "great" free trade deal with the EU after it leaves the bloc while taking back control of tariffs and regulations in order to secure deals with other countries.

He said the Brexit's success "will depend on what we make of it", calling it "absurd" for Britain to leave the bloc only to align itself with all its rules in future.

"We would be mad to go through this process of extrication from the EU and not to take advantage of the economic freedom it will bring," he said.

"In a global marketplace… it seems extraordinary that the UK should remain lashed to the minute prescriptions of a regional trade bloc comprising only six percent of humanity," he added.

According to Johnson, the United Kingdom intends to actively participate in EU foreign policy after Brexit.

"It makes sense for us to continue to be intimately involved in European foreign and security policy. It would be illogical not to discuss such matters as sanctions together, bearing in mind that UK expertise provides more than half of all EU sanctions listings," Johnson said, as quoted in a government release.

Johnson also stressed that the United Kingdom's commitment to the security interests of the European Union remains unshakable, and added that London allocates huge funds for the defense needs of Europe and for the support of developing countries.

"We will continue to be Europeans both practically and psychologically… Our commitment to the defense of Europe is unconditional and immovable," Johnson said.

The foreign minister went on by saying about those who want to stop the country's secession from the EU.

"I fear that some people are becoming ever more determined to stop Brexit, to reverse the referendum vote of 23 June 2016, and to frustrate the will of the people. I believe that would be a disastrous mistake that would lead to permanent and ineradicable feelings of betrayal. We cannot and will not let it happen," Johnson said. Excerpts of his speech are published by The Guardian newspaper.

The anti-Brexit position among the UK population has repeatedly been ignored in the past, Johnson noted.

"It is not good enough to say to remainers – you lost, get over it, because we must accept that many are actuated by entirely noble sentiments, a real sense of solidarity with our European neighbors and a desire for the UK to succeed," Johnson said.

Soros 'Proud' of Providing £400,000 to Scrap Brexit Referendum Results
At the Brexit referendum in 2016, 51.9 percent of UK voters supported leaving the European Union. Recent polls suggest however that the number of those backing the option of remaining in the bloc has increased since then.

The recent study by the ICM pollster for The Guardian showed that those who are in favor of the so-called Remain option represent 51 percent of the respondents, while 49 percent of the UK nationals back the Leave option, meaning Brexit.

Brexit negotiations between the United Kingdom and the European Union started in June and are due to be completed by the end of March 2019.