New US Sanctions Against Russia Are Coming, 'Expect Them' Soon - US Treasury Sec 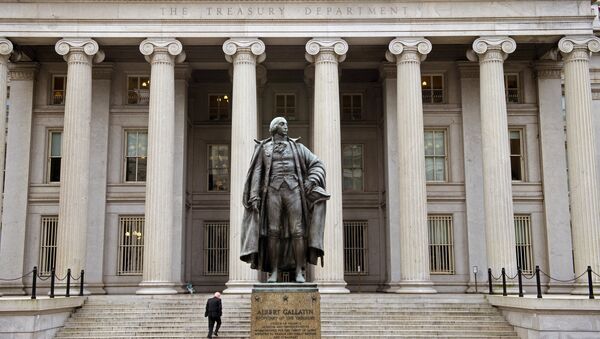 © AFP 2021 / PAUL J. RICHARDS
Subscribe
The statement follows January release of the US so-called "Kremlin report" that listed the names of 114 Russian politicians, including members of Russian presidential administration and government, as well as 96 businessmen.

The United States Secretary of the Treasury revealed that sanctions against the people mentioned in the so-called 'Kremlin list' would be soon introduced.

"We are actively working on those sanctions. And you should expect them in… [the] near future," US Treasury Secretary Steven Mnuchin told the US Senate Finance Committee.

Russian Diplomatic Mission Hopes to Improve Bilateral Dialogue With US - Envoy
Previously responding to the "Kremlin report" release, Russian President Vladimir Putin described the sanctions as a deadlock solution, which is likely to lead to losses for those who introduced them.

Putin expressed hope the West would soon "get bored with the sanctions policy" and Russia-US relations would normalize.

"The policy of artificially imposed restrictions in international business relations is a dead-end road that leads everyone, including the initiators of such a policy, to missed profits and direct losses," Russian President stated.

In January, the US published the so-called "Kremlin report," which listed names of 114 Russian politicians, including the Russian presidential administration and members of the government, as well as 96 businessmen.

Inclusion on the list implies that restrictive measures against named officials can be introduced in the future.

Commenting on the release of the report, Vladimir Putin called it an "unfriendly step" by the US administration, which harms Moscow-Washington relations.

In the wake of the publication, the Association of European Businesses (AEB) warned that the US Treasury's "Kremlin Report" can affect the interests of European investors and European companies doing business in Russia.

The "Kremlin Report" was drafted in accordance with the law called Countering America's Adversaries Through Sanction Act and signed by the US President Donald Trump in August 2017.

On July 28 the Russian Foreign Ministry suspended the use of all US Embassy warehouses and its compound in Moscow amid the new US anti-Russia sanctions bill and follows a series of restrictive measures which have been imposed by Washington since 2014. It is similar to Washington's decision to expel 35 Russian diplomats and suspend the use of diplomatic assets by Moscow in late 2016.

The relationship between Russia and the US worsened amid the internal conflict in Ukraine and Crimea's reunification with Russia. Although Moscow denied all the allegations of meddling in Ukrainian internal affairs, a number of Western countries imposed sanctions on Russia, with the Kremlin then introducing response measures and launching the policy to replace foreign imports with domestic products.

000000
Popular comments
The US is an island. We don't need it anymore than cancer