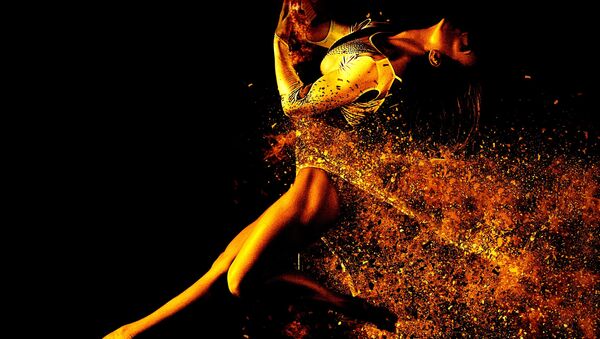 While the women danced wearing high heels, fishnet stockings and lingerie, some filmed them on their phones, while others took pictures with the dancers following the show.

Throughout the duration of the conference at London's Excel exhibition center, the performers from Siberia took the mini stage about twenty times.

ICE Totally Gaming is described as the "only b2b gaming event that brings together the online and offline gaming sectors." Endorphina, the gambling company, was planning to show some "steamy" things during the show, and it seems it had accomplished its goal.

"We’re looking forward to spicing things up and making this weekend unforgettable for our visitors with a completely unique show that will accompany the release of our new game. Play with your weaknesses and let’s see how much you can enjoy yourself at ICE Totally Gaming 2018 in London with Endorphina," the company wrote on its website.

The UK media highlighted the pole dancers defied calls issued by the UK Gambling Commission to tackle chauvinism at the trade show.

The gambling conference was slammed for its sexist vibes, with Sarah Harrison, chief executive of the UK Gambling Commission, saying: “In the spirit of the 21st century, when both women and men play strategic and decision-making roles in businesses, we encourage all exhibitors to mindfully represent support staff promoting their products at the show in a non-offensive and non-stereotyping way.”

“It is time that companies woke up and realized that in 2018, using women’s bodies to sell stuff to men belittles both sexes. Worse even than this is people who think it’s just a laugh, who should understand that treating women’s bodies this way is part of the same culture that means schoolgirls routinely suffer sexual harassment and assault at school, for example,” said Labor MP Jess Phillips.

The scandal was brought to light after several women working in the gambling industry claimed they had been groped and propositioned for sex.