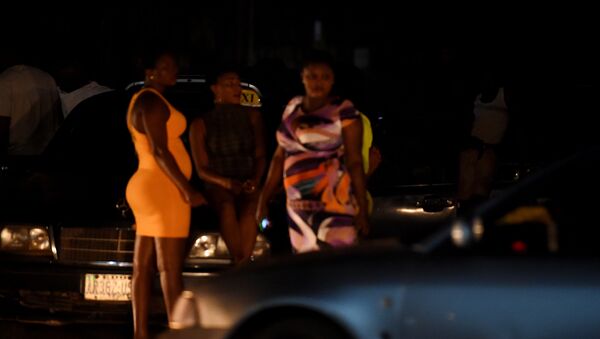 Some women who come to Europe from Africa are allegedly forced into prostitution because they fear a deadly curse human traffickers had inflicted on them.

Some women who come to Europe from Africa are allegedly forced into prostitution because they fear a deadly curse human traffickers had inflicted on them.

Female migrants arriving in Europe from Nigeria are forced to become prostitutes because they believe they are jinxed and fear that they'll die if they not obey, according to web portal Swissinfo.

The stories of many Nigerian prostitutes in Europe are typical. They were recruited by human traffickers in their home countries who promised them a better life in Europe and pledged to help with the trip to the developed nations of the global North.

However, before sending the young women to European countries, recruiters reportedly conduct a special ritual on them which they say is a juju. As a result, the women, who grew up believing in dark magic and witchcraft, are convinced that they will die if they disobey and refuse to engage in prostitution.

"The traffickers have found a way to keep the girls forever. It's a kind of marketing strategy," Gifty Amponsah, a migrant from Ghana and an employee of a counseling center in the field of human trafficking and sexual exploitation told the online portal.

Upon their arrival in Europe, women are told that they have to repay the debt to the "well-doers." Sometimes, the required amount reaches tens thousands of euros, which is far more than the actual cost of the journey.

Often, newcomers agree to any conditions of work. Some of them work with clients for only eight euros per hour.

Social workers in Europe that deal with prostitutes and try to help them to return to normal lives face not only economic problems, but also the fears the Nigerians have of the spell.

"You can't just tell the women that they should not believe in juju," Gifty Amponsah said.

South Korean Court Finds Government Promoted Prostitution with US Soldiers
Stephan Fuchs, an expert in the field of migration, also believes that it is virtually impossible to convince these women against believing in the dark power of the spell.

The fear of "juju" is so great that some women even develop mental disorders, Fuchs said.

For him it is essential to inform people who deal with prostitutes about such cases and teach them to deal with the problem as sensitively as possible.

"We must not underestimate the belief of these women in 'Juju' — you have to take them seriously and listen to them," Fuchs said.

Some 1,500 to 3,000 people per year come from Africa to Switzerland alone to engage in prostitution.