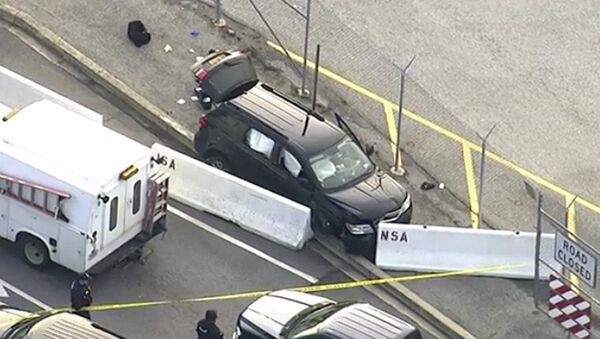 According to the FBI statement, three males were in the car that tried to enter the NSA premises: currently, two of them are in custody, one in a hospital due to injury.

The FBI reported that one NSA security officer and one civilian "on-looker" were injured during the incident.

The NSA stated earlier that several people were hospitalized due to the incident, no injuries appear to be from the gunfire.

As the NSA stated, the incident took place around 07:00 a.m. local time (12:00 a.m. GMT), when a car attempted to ram into the US Army installation near the NSA building. According to the footage from the site, police searched a black sports vehicle with bullet holes in its windshield, with all the items from the car checked by a police dog.

However, the agency didn't specify whether shots that followed were made by a suspect of by law enforcement.

"Weapons were discharged in the course of the incident, which remains under investigation," the agency said in a statement. "The situation is under control and there is no ongoing security of safety threat."

A US federal official stated, as quoted by the Reuters news agency, that the shooting was unlikely to be connected with terrorism.

According to previous ABC News reports, at least three people were shot and wounded, and one person is now in custody. The investigation into the attack is currently underway.

Responding to the attack, the FBI Baltimore office stated that FBI was sending personnel to respond the shooting incident.

"The FBI is aware of the incident at Fort Meade and we are sending personnel to respond at this time," FBI Baltimore said in a Twitter message. 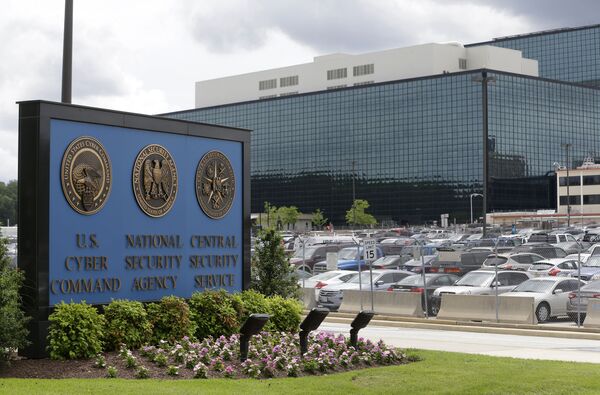 LATEST: Shooting outside NSA headquarters.This is the SUV that was stopped at the entrance at Fort Meade, Maryland. You can see bullet holes in the windshield. I'll have an update on this next on KOLD. #Tucson pic.twitter.com/SwBwSLXeEB

An NSA spokesman, as quoted by NBC TV, the incident is under control.

BREAKNG!!! Following reports from AA Co Fire that three people have been shot near the NSA campus on MD 32. Unclear exactly where this happened. All 3 victims are alive. Ramps from the B/W Pkwy to MD 32 EASTBOUND are CLOSED. MD 32 may be CLOSED near the NSA. @wbalradio

The White House reacted to the attack, saying that US President Donald Trump was briefed on the incident.

"The President has been briefed on the shooting at Ft. Meade. Our thoughts and prayers are with everyone that has been affected. We will continue to provide updates as they become available," Walters said in an email.

The area where the shooting occurred - Fort Meade, is located not far a major Washington-area highway and some drivers sometimes unintentionally take the exit that leads them to its gates, which are manned by armed guards.

000000
Popular comments
If anyone remembers the film "Conspiracy Theory" staring Mel Gibson (1997).....A certain agency in US government, using drugs and torture turned a bunch of people into psychotics to deploy when they needed to "stir the pot" of public opinion, or "eliminate" a problem. When I read about individuals doing stupid stuff like this attack on NSA......I begin to wonder about just how much truth might really be in that film plot.