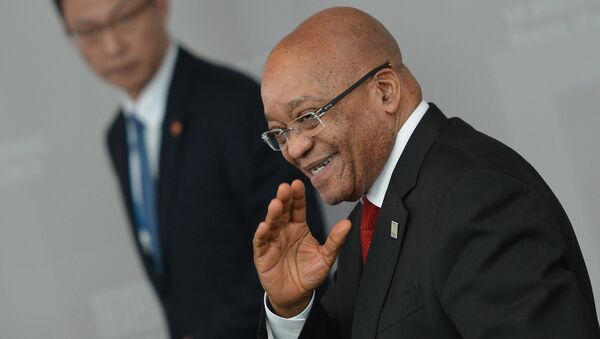 In a speech on Wednesday, South African President Jacob Zuma announced his resignation effective immediately after losing the support of his party, the African National Congress (ANC). He has been president since May 2009, but has been significantly pressured to resign under allegations of corruption.

Zuma, the fourth president of the young republic, announced his resignation (with protest) after a 30-minute speech. He is the second president of South Africa to resign. In the past, the 75-year-old Zuma has been referred to as "The Teflon President" for constantly being embroiled in corruption scandals but holding onto his power, and the support of the dominant ANC.

But he lost that support earlier in February, when ANC leader Cyril Ramaphosa publicly stated that the ANC would hold a vote of no confidence on Thursday.

"It is now public knowledge that the ANC resolved to recall me as the president of the republic," Zuma said during his resignation speech. "I have now been compelled to resign after a promise for a vote of no confidence [in the National Assembly] tomorrow."

"The ANC is indeed the party on whose nomination I became a candidate for the presidency… it was on the ANC's nomination that I was later elected by the majority in the National Assembly as the president of the republic. I am forever indebted to the ANC, the liberation movement, which I've served almost all my life. I respect each member and leader of this glorious movement. I respect its gallant fight against sanctuaries of white minority brutality whose relics remain today and continue to be entrenched in all manner of sophisticated ways in order to ensure the continued survival of white privilege."

"I was also elected in terms of section 86 of the constitution, and from that moment pledged my loyalty to the constitution of the Republic of South Africa… it has been a mammoth task, one that can never be done without difficulty and learning along the way. None of us, no matter how perfect, can claim that the building of a new society and the marshaling of a liberation movement into a political party is a straightforward task."

"All my life, I've served and will continue to serve the ANC in pursuit of the objectives of the national democratic revolution. I've served within the prism of our much-acclaimed constitution, whose foundation of values I've fully subscribed to. I understand fully that while I serve at the pleasure of my party, the ANC… I [ultimately] serve the people through the National Assembly."

"We tend to place the political party above the supreme law of the country, which is the rulebook of the country's political engagement. I do not make this reference because I am above reproach. Nor do I wish to proclaim that my understanding of my political responsibilities, I have been the epitome of integrity. If truth be told, none of us are. However, I respect the prescripts of the constitution and how we stay in and exit political office."

"There has been much speculation about how the president of the republic should exit his or her office… I did not agree to leave with perks and benefits as my capacity as president. It is my party that availed me to serve on the basis of the constitution as the supreme law of the land. Make no mistake, no leader should stay beyond the time determined by the people they serve. Most importantly, no leader should seek an easy way out simply because they could not face life without the perks that come with their political office."

"I do not fear exiting political office… I've served the people of South Africa to the best of my ability. I am forever grateful that they entrusted me with the highest office of the land." However, Zuma added that he wished to be presented with a list of transgressions that would detail why he was being asked to leave office.