New US Intelligence Report Shed Light on Possible Attacks on US, Allies 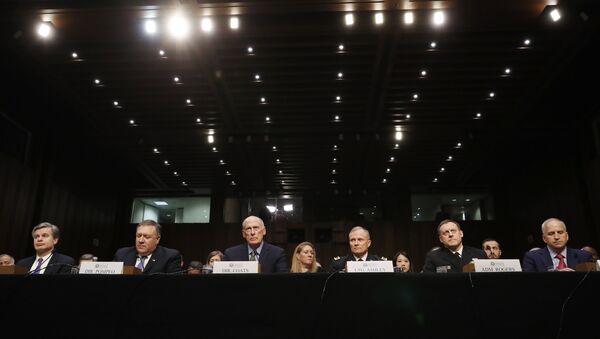 US National Intelligence Director Dan Coats has revealed the latest in a series of US accusations against North Korea, Russia, Iran and some other states.

"We expect the heavily sanctioned North Korea to use cyber operations to raise funds and to gather intelligence or launch attacks on South Korea and the United States," Coats warned in a statement for the record titled "Worldwide Threat Assessment of the US Intelligence Community."

"We expect to see North Korea press ahead with additional missile tests this year and its foreign minister has threatened an atmospheric nuclear test over the Pacific," Coats told lawmakers.

READ MORE: ‘Attitude and Arrogance': Everyone But US Pleased With Korean Peninsula Thaw

This stance has been echoed by Defense Intelligence Agency Director Robert Ashley, who said in congressional testimony that the United States and other countries should not be misled by how the North Koreans are acting during the current Winter Olympics.

"His [Kim Jong Un] strategic calculus is not changing and we should not be misled by the events that are taking place around the Olympics," Ashley told the Senate Intelligence Committee.

A high-level delegation from North Korea, including Kim Yo Jong, the sister of North Korea's leader and the President of the Presidium of the Supreme People's Assembly Kim Yong Nam attended the start of the Olympics last week. Both were part of a meeting with South Korean President Moon Jae-in.

Moon was invited to visit Pyongyang to continue discussions, and has said he wants to create the environment for the visit to happen.

US Vice President Mike Pence said during his trip to South Korea that the United States was preparing tough new sanctions against Pyongyang. Pence also refused to speak with any members of the North Korean delegation at the Olympics.

Accusations Against Other States

The US intelligence report, released on Tuesday, has accused three states: Russia, Iran and North Korea of preparing aggressive cyber attacks against the US and allies.

"Russia, Iran, and North Korea, however, are testing more aggressive cyber attacks that pose growing threats to the United States and US partners," Coats said at an annual Senate Intelligence Committee hearing on worldwide threats, commenting on the report.

"Persistent and disruptive cyber operations will continue against the United States and our European allies using elections as opportunities to undermine democracy," Coats stated.

As the US intelligence report claimed, Russia's and China's anti-satellite weapons would reach initial operational capability within the next few years.

The report has finally shed light on the US claims about Russia's alleged violation of Intermediate-Range Nuclear Forces (INF) Treaty to develop ground-launched cruise missiles.

"Russia has developed a ground-launched cruise missile (GLCM) that the United States has declared is in violation of the Intermediate-Range Nuclear Forces (INF) Treaty," Coats warned in a statement.

In addition to previous allegations made by Washington regarding Moscow's alleged meddling in the 2016 US presidential election, which the US thus-far has failed to prove despite two ongoing investigations, the new report has continued the trend.

According to Dan Coats, Russia was still meddling and threatening the upcoming 2018 elections.

"The 2018 US mid-term elections are a potential target for Russian influence operations," Coats said. "At a minimum, we expect Russia to continue using propaganda, social media, false-flag personas, sympathetic spokespeople, and other means of influence to try to exacerbate social and political fissures in the United States."

Coats said all 29 members of the North Atlantic Treaty Organization (NATO) were unanimous in their assessment about Russia’s attempt to undermine democratic processes in foreign countries.

Both the United States and NATO are concerned that Moscow will seek to meddle in the upcoming parliamentary elections in Latvia, he added.

His words have been confirmed by other intelligence chiefs, participating in the event.

"We have seen Russian activity and intentions to have an impact on the next election cycle here," Director of Central Intelligence Agency (CIA) Mike Pompeo said.

Russia has faced numerous accusations of interference in foreign elections, including the 2016 US presidential vote, though Moscow has repeatedly denied such allegations. Kremlin spokesman Dmitry Peskov has called the claims groundless, while Russian Foreign Minister Sergey Lavrov has stressed that no evidence has been produced to substantiate the accusations.

Speaking about Iran, Coats stated that the country could seek to develop an international continental ballistic missile (ICBM) in order to achieve its goal of deterring any US attack on the Islamic Republic.

"Tehran’s desire to deter the United States might drive it to field an ICBM,” Coats said in a statement to Congress, titled “Worldwide Threat Assessment of the US Intelligence Community."

Iran recently made significant progress in its space program with the launch of its Simorgh Satellite Launch Vehicle in July 2017, a rocket which could help Tehran develop an ICBM using similar technologies, Coats said in the statement.

Iran’s ballistic missile programs give it the potential to threaten targets across the region, Coats said. Tehran already has the largest arsenal of ballistic missiles in the Middle East, he added.

This time, US intelligence has also mentioned Pakistan amid other potentially threatening countries, saying that it was developing new kinds of nuclear arms.

Coats also touched upon the use of chemical weapons in multiple attacks in both Iraq and Syria by the Daesh terror group (outlawed in Russia).

"We assess that ISIS [Daesh] is also using chemicals as a means of warfare. The OPCW-UN JIM [Joint Investigative Mechanism] concluded that ISIS used sulfur mustard in two attacks in 2015 and 2016, and we assess that it has used chemical weapons in numerous other attacks in Iraq and Syria," Coats told the US Senate Intelligence Committee.

As he explained, the US assessment shows that the Syrian government has not declared all its chemical weapons elements and is capable of carrying out attacks in the future, adding that Damascus "used the nerve agent sarin in an attack against the opposition in Khan Shaykhun on 4 April 2017."

"The OPCW-UN Joint Investigative Mechanism (JIM) has attributed the 4 April 2017 sarin attack and three chlorine attacks in 2014 and 2015 to the Syrian regime," Coats said. "Even after the attack on Khan Shaykhun, we have continued to observe allegations that the regime has used chemicals against the opposition."

Commenting on the report, Coats noted that Washington expected Moscow to become more emboldened and disruptive as it allegedly launches cyber attacks against Ukraine in the coming year.

"We expect that Russia will conduct bolder and more disruptive cyber operations during the next year, most likely using new capabilities against Ukraine," Coats warned in a statement for the record titled "Worldwide Threat Assessment of the US Intelligence Community."

As US intelligence specified, the conflict in Eastern Ukraine was unlikely to result in a major offensive by either side in 2018, forecasting the stalemate to continue.

Whereas, the revelations went further, with the intelligence chief saying that the Kurdish People's Protection (YPG) units might seek some kind of autonomy in Syria.

"The Kurdish People’s Protection Unit — the Syrian militia of the Kurdistan Workers’ Party (PKK) probably — will seek some form of autonomy but will face resistance from Russia, Iran, and Turkey," Coats said.

Speaking about the situation in Syria, the intelligence chief stated that the country's armed opposition movement was probably no longer capable of gaining the upper hand in the country's military conflict.

"The Syrian opposition's seven-year insurgency is probably no longer capable of overthrowing President Bashar al-Assad or overcoming a growing military disadvantage," Coats warned in a statement for the record titled "Worldwide Threat Assessment of the US Intelligence Community."

"Moscow probably cannot force President Assad to agree to a political settlement that he believes significantly weakens him, unless Moscow is willing to remove Assad by force," he said.

"While Assad may engage in peace talks, he is unlikely to negotiate himself from power or offer meaningful concessions to the opposition."

As he specified, Daesh still had enough resources to maintain its insurgency operations in Syria throughout this year.

"ISIS [Daesh] is likely on a downward trajectory in Syria; yet, despite territorial losses, it probably possesses sufficient resources, and a clandestine network in Syria, to sustain insurgency operations through 2018," Coats said.

The US-led coalition against Daesh said earlier in February that the terrorist group lost approximately 98 percent of the territory it once held in Iraq and Syria.

In December, Russian President Vladimir Putin said that Daesh had been defeated on both banks of the Euphrates river in Syria. However, a portion of the Russian troops who had been assisting the forces of Syrian President Bashar Assad in the fight against terrorism has remained in the country.

Russia and Iran plan to maintain a long-term presence in Syria and have started security rights for military bases, as well as contracts for reconstruction and oil and gas exploration, Coats said.

"Iran is also seeking to establish a land corridor from Iran through Syria to Lebanon" he said.

Coats noted that as of October 2017, more than 5 million Syrian refugees were residing in neighboring countries, while another 6.3 million were internally displaced.

US Director of National Intelligence Dan Coat has described the situation in Afghanistan.

"The overall situation in Afghanistan probably will deteriorate modestly this year in the face of persistent political instability, sustained attacks by the Taliban-led insurgency, unsteady Afghan National Security Forces (ANSF) performance, and chronic financial shortfalls," the report "Worldwide Threat Assessment of the US Intelligence Community" said.

Coats explained that Afghanistan’s government of national unity may struggle to hold the long-delayed parliamentary elections scheduled for July 2018, and may also struggle to prepare for the presidential election set for next year.

Activates by the Taliban are expected to strain population centers under the control of the Afghan security forces, Coats said.

Moreover, Afghanistan’s economic growth will stagnate at about 2.5 percent this year and Kabul will continue to depend on international assistance for a great majority of its funding beyond 2018, Coats added.

In August 2017, US President Donald Trump announced a new strategy for Afghanistan and pledged to continue US support for the Afghan government and military in their fight against the ongoing militant insurgency and various terror groups.