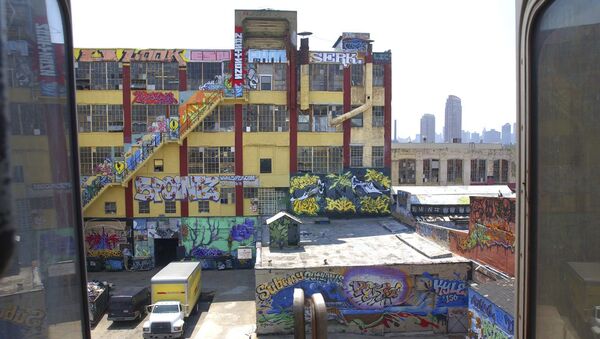 According to US District Judge Frederic Block in Brooklyn, 45 out of the 49 paintings were works of art that were "wrongfully and willfully destroyed" by the landlord Jerry Wolkoff, Newser reported. The artwork was painted in 2013 and whitewashed a year later.

The artwork was located in an area called 5 Pointz Aerosol Art Center, Inc., more commonly referred to as simply 5 Pointz, a mural space in Long Island City, Queens. The aerosol artists sued the owner of the site under the Visual Rights Act, a 1990 federal law that protect the destruction of artwork of "recognized stature." The act doesn't force property owners to keep art without end, but it does require them to file the necessary permits and give artists 90 days notice of their plan to remove the art, giving artists the option to remove it at their own expense.

The judge also noted that before the artwork was demolished, it drew many people to the site daily as it became the "world's largest collection of quality outdoor aerosol art." The art even served as a backdrop to the 2013 movie "Now You See Me" and was also used by pop performer Usher in one of his video shoots.

After a three-week trial in November, Block said the "respectful, articulate and credible" artists testified about "striking technical mastery and vision worthy of display in prominent museums if not on the walls of 5 Pointz." The judge also said that he was impressed with how so much of the artwork "spoke to the social issues of our times."

According to Wolkoff, he had permitted the artists to display their art on the buildings for years but claimed they were always aware that the buildings would be destroyed eventually. The artists expressed their desire buy the properties — until their value surged to over $200 million. The jury's decision came after much legal clashing. The artists first filed an a lawsuit in 2013 against Wolkoff to prevent him from tearing down 5 Pointz to build luxury apartments. Block found that Wolkoff does have the right to tear down the property, since he is the owner. He did, however, find that the artwork qualified for protection under the Visual Rights Act, giving the artists the right to be compensated for its destruction on Monday.

"The shame of it all is that since 5 Pointz was a prominent tourist attraction, the public would undoubtedly have thronged to say its goodbyes… and gaze at the formidable works of aerosol art for the last time," Block wrote. "It would have been a wonderful tribute for the artists that they richly deserved," Block said, the New York Daily News reported.

"If not for Wolkoff's insolence, these damages would not have been assessed," Block added. "If he did not destroy 5 Pointz until he received his permits, the Court would not have found that he had acted willfully," referring to the fact that Wolkoff had whitewashed the graffiti art without the proper permits which would have given the artists enough time to salvage their artwork.

In addition, Block explained that the Wolkoff did not show any remorse for his actions.

"Wolkoff has been singularly unrepentant. He was given multiple opportunities to admit the whitewashing was a mistake, show remorse, or suggest he would do things differently if he had another chance," Block said.

"Wolkoff could care less. As he callously testified," the judge said. "The sloppy, half-hearted nature of the whitewashing left the works easily visible under thin layers of cheap, white paint, reminding the plaintiffs on a daily basis what had happened. The mutilated works were visible by millions of people on the passing seven train."